What the Brexit Mess Means for America 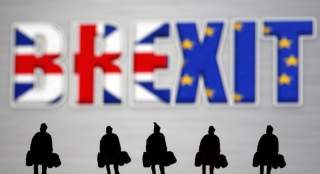 Donald Trump Jr. has taken to the op-ed pages to lecture the British about how they should have taken his father’s “advice” on handling the Brexit issue. A more instructive cross-Atlantic comparison would examine how the state of political parties in the United Kingdom and the United States figures prominently in current problems in each country, but in opposite ways.

A breakdown of formerly strong party discipline in Britain has much to do with the current mess over Brexit. Former Prime Minister David Cameron’s blunder of holding a referendum on the subject three years ago was an effort to manage restive members of his own Conservative Party who opposed continued membership in the European Union. In recent days, Brexiteers in that same party have furnished many of the nays in crushing defeats in the House of Commons of Prime Minister Theresa May’s government. Even some ministers have voted against their own government, in a parliamentary spectacle that would have been almost unthinkable in Britain just a few years ago.

Division within the opposition Labour Party also has been a factor. Party leader Jeremy Corbyn, a Euroskeptic who campaigned only half-heartedly to remain in the EU, is a darling of his party’s left-wing but never had the support of most Labour members of parliament. Meanwhile, fear that a governmental crisis followed by a general election would produce a far-left government led by Corbyn has dissuaded even many Conservatives who are disillusioned with May from installing a new leader, despite her inability to forge a Brexit formula enjoying majority support.

In the United States, the trend in party politics over the past twenty-five years has been in the opposite direction: toward party loyalty and hyperpartisanship trumping everything else. Some of the most damaging effects have come from a determination to undo what leaders of the other party did, without offering a workable replacement. This has happened on major aspects of domestic policy (deconstruction of the Affordable Care Act) and foreign policy (withdrawal from the Trans-Pacific Partnership and Paris climate agreement, and reneging on the Iran nuclear agreement).

Over the past two years, party loyalty among Republicans in Congress has protected Trumpism. The picture has changed somewhat with a change in party control in one of the houses of Congress, not because of any significant change in the party loyalty.

Most recently some cracks in that loyalty have appeared, in the form of a few Republican votes against President Donald Trump’s attempt to use an emergency declaration to circumvent Congress’ power of the purse regarding a border wall and against continued U.S. involvement in the destructive Saudi-led war in Yemen. The main story, however, still is not those few dissenting votes but rather the continued party loyalty of enough Republicans—however uncomfortable they may be with the president’s moves on these issues—probably to preclude an override of vetoes on either the border wall or on Yemen. Meanwhile, some Democrats show signs of adopting positions on war and peace or policy toward Russia mainly to be on the opposite side of issues from Trump.

The kind of party system that has been serviceable in previous years for either the United Kingdom or the United States would not work well in the other country. The reasons lie in constitutional and cultural differences that have always divided Britain and America despite all that they have in common.

For most of the past several decades Britain was governed by what in effect was an elected dictatorship. Parties alternated in power according to the results of elections, but once in power were generally able to use the party whip to ensure that on important policy matters their members of parliament would enact the legislation that the government’s program required. It was a form of cabinet government that conflated the executive and legislative functions of government and even extended to the judicial function—as personified by the lord chancellor, who, until a constitutional reform a few years ago, was simultaneously a member of the cabinet, the presiding officer of one of the houses of the legislature, and the head of the judiciary.

This was an extraordinary concentration of power that in most countries would be a recipe for possible oppression. It worked fairly well in Britain thanks to an admirable political culture that had evolved over centuries. That culture has featured spirited competition between parties but within a framework in which partisanship is not allowed to get out of hand and in which a sense of fair play prevails.

Not only was strong party discipline safe for democracy; the party discipline was part of what made the unitary form of cabinet government work. It presented voters at each general election with a clear choice and a well-founded expectation that the winning party’s program would be enacted. The recent breakdown of party discipline—for various reasons, including the rise of third parties that have made it harder for either Labour or the Conservatives to secure a parliamentary majority—has thus raised what the British consider constitutional questions as well as the sort of policy disorder that Brexit illustrates.

The U.S. constitution, of course, embodies a much different system, featuring separation of powers and checks and balances among different branches of government. Under this system, the increased party-line behavior of recent years has impeded rather than facilitated governmental effectiveness. Control by different parties of different parts of the government has meant obstruction for partisan motives and resulting gridlock. Control by a single party has meant an absence of checks on excesses by the executive.

American politicians still have something to learn from their British brethren—especially the part about fair play, a deficiency of which in the United States is reflected in such pathologies as gerrymandering and voter suppression laws. Beyond that, the sort of party politics that would be good for Britain would not be good for the United States. And Britain can safely ignore Donald Trump Jr. regarding his father’s “advice” about Brexit, which evidently was that May should have sued the European Union. It still will be interesting to watch the continued evolution of both political systems to see if either one is able to step back from their very different, but both severe, political difficulties.