What Does the Indictment Against Netanyahu Portend? 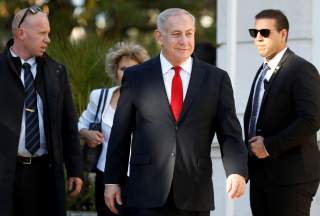 Israeli prime minister Benjamin Netanyahu, under indictment for corruption, has been launching vociferous counterattacks that sound quite familiar to anyone (including editorial pages of the mainstream U.S. press) who has been following a parallel story of high-level wrongdoing in the United States. Netanyahu said that earlier reports of the conduct that led to charges against him were “fake news.” He has labeled investigations into the matter a “witch hunt”.  Now he is saying that the indictments are part of an “attempted coup.”  The similarities between a beleaguered Netanyahu and Donald Trump extend beyond such rhetoric to larger habits of never admitting wrongdoing and constantly attacking their accusers. Their common objective has been the retention of power free of any introspection about larger values.

Both heads of government have long histories of demagoguery, with an apparent disregard for possibly violent consequences. Netanyahu’s history includes stirring up hatred against political rivals who participated in the Oslo peace process—rabble-rousing that the family of the late Israeli prime minister Yitzhak Rabin believes, with good reason, was partly responsible for Rabin’s assassination by a right-wing Jewish Israeli. More recently, Netanyahu’s racist rhetoric has featured warnings about Arabs turning out to vote “in droves”.

The parallel attitudes and habits of Netanyahu and Trump underscore what has become a more direct political link between the two. Netanyahu’s government has pursued policies toward Israel’s conflict with the Palestinians that have been increasingly and blatantly indefensible in terms of peace, justice, and international law. As such, support for Israel and its policies in the United States has been narrowing to a political base on the right dominated by evangelical Christians who bestow their support partly according to a religious doctrine that gives a special God-given place to Israel. Trump’s political strategy on this and many other issues is focused on the same narrow base. Accordingly, the Trump administration’s policies toward Israel and the Israeli-Palestinian conflict have consisted of one gift after another to Netanyahu’s government, unaccompanied by any benefit to U.S. interests. The gifts have included movement of the U.S. embassy to Jerusalem, recognition of Israeli sovereignty over the occupied Golan Heights, diverse forms of Palestinian-bashing, and the repudiation of international law regarding the colonization of conquered territory.

The offenses of both Netanyahu and Trump have involved bribery and corruption of democratic elections. The indictment of Netanyahu mentions such traditional mediums of corrupt exchange as luxury goods (in Netanyahu’s case, expensive cigars and champagne) given in return for policies that favor the business interests of those giving the goods. In the other cases that the incitement covers, the benefit Netanyahu is accused of seeking in return for policy favors to business interests is favorable treatment in the newspapers or online news outlets that those interests control. Trump, who had welcomed and openly invited Russian interference in the 2016 U.S. presidential election, attempted to coerce Ukraine into interfering in the 2020 U.S. election by making U.S. military aid and a presidential meeting contingent on Ukraine publicly incriminating a rival presidential candidate.

An obvious difference in the two leaders’ election-corrupting activities is that the offenses covered by the indictment of Netanyahu all took place within Israeli domestic politics, whereas Trump’s case has involved interference by foreign powers. Even here, however, is a political link between the two. Notwithstanding the significance of Russia’s interference in U.S. politics and Trump’s attempt to get Ukraine to interfere, the biggest foreign interference in U.S. politics has for years been that of Israel. That’s what the string of gifts that the Trump administration has bestowed on Netanyahu’s government, and the hoped-for electoral implications of those gifts, is about (in addition to personal and religious inclinations of some members of the Trump administration involved in the gift-giving). Netanyahu has been directly involved in some of the most blatant foreign interference in U.S. politics, including denouncing policies of the then-incumbent U.S. administration from the rostrum of the U.S. House of Representatives, at the invitation of the opposition party.

As the corruption case against Netanyahu has gathered attention, Trump has tried to play down his relationship with the prime minister, saying, “Our relations are with Israel, so we’ll see what happens.” That line should be given no more weight than any of Trump’s many other attempts to distance himself from Trump collaborators who became public-relations liabilities. The same was true of Trump saying of Gordon Sondland—a central figure in implementing Trump’s attempt to coerce Ukraine, who gave incriminating testimony about that attempt—that “I don’t know him very well.”  And it was true of Trump saying he didn’t know whether Rudy Giuliani was still his attorney.

The indictment against Netanyahu, and the recent impeachment hearings about Trump and Ukraine, do not include all the suspect activity by either leader that is worth scrutinizing or that raises parallels between the two men. Although not covered in the recently announced indictment, Israel’s attorney general also has been investigating a case involving Netanyahu, a cousin of his, possible bribery, and the purchase of some German-made submarines that Israeli military leaders say they don’t need. This affair—apparently involving a political leader ignoring the judgment of military leaders—evokes Trump’s recent interference in the case of a Navy SEAL convicted of misconduct.

Trump, a teetotaling non-smoker, will not be selling any favors in return for cigars and champagne, but the counterpart to that portion of Netanyahu’s offenses is Trump’s mixing of private and government business in defiance of the U.S. Constitution’s emoluments clause.  Trump’s obstruction of justice, as cataloged in Robert Mueller’s report and with the catalog growing larger during the current impeachment investigation, finds a counterpart in Netanyahu’s efforts to obstruct justice by impeding the investigation of his own case.

Activities that fall under the label of corruption do not constitute the most damaging malfeasance by Netanyahu. That distinction would belong to his government’s policies regarding the use of armed force and subjugation of the Palestinians—policies that can genuinely be regarded as crimes. Trump’s administration, by unreservedly supporting and abetting those policies, makes the United States share all the more in the ill consequences of permanent conflict and injustice and the killing of any chance of peace in that part of the Middle East.

The bad effects of corruption in high places in both Israel and the United States include compromising the national security interests of each country. This can include waste from letting personal financial interests interfere in military procurement decisions. It can include weakening order and discipline in the armed services by letting politics interfere in the military justice system.

Even more serious is the damage to representative democracy from the corruption of the electoral process. Here the United States has farther to fall, given that Israel has long been a democracy only for a portion of the population it rules, and not for the other substantial portion that is denied political rights. American democracy already had its own flaws, such as gerrymandering and voter suppression laws, before Trump’s arrival on the political scene. But the active encouragement of involvement by foreign governments constitutes substantial further damage to that democracy—one that the Founding Fathers warned against as an ill consequence of passionate partisanship.