What Have the Saudis Done For Us Lately? 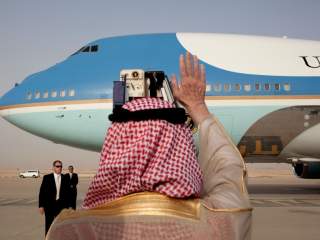 The president of the United States is going on a foreign trip, and that means it is time for another surge in temperature-taking regarding the state of relations between the United States and some of its “allies.” The countries involved may include not only ones such as members of NATO that are indisputably allies by virtue of being linked to the United States by a mutual security treaty but also “allies” that are called that mainly because there is a general habit or practice in Washington of calling them that. The temperature-taking includes an assumption that smooth, harmonious relations with any “ally” is a good thing, and that anything less than harmony should be cause for hand-wringing. Lost sight of are any carefully formulated criteria for anointing any country not linked by a mutual security treaty with the label “ally,” and any critical examination of whether and why frictionless relations with these states should be considered necessarily good.

Whether such relations are good comes down to whether an alliance-type relationship with the particular state has something in it for the United States. It is a question of whether the other country is doing something that protects or advances U.S. interests, and more specifically whether it is doing it only because it is in an “alliance” with the United States and would not be doing it for its own reasons anyway.

Two other considerations might expand slightly this standard for weighing the value of a putative alliance and of showing some degree of deference to the putative ally. One is that, even though the other state may be doing something anyway for its own reasons, there might be greater mutually beneficial effectiveness if the other state and the United States do whatever they're doing in close coordination with each other. The other consideration, which follows from the concept in the Declaration of Independence of having a decent respect to the opinions of mankind, is that sometimes an ally may have a better idea of what is in U.S. interests than the U.S. policy-makers of the day do. (For example, the United States would have been better off if, when deciding to invade Iraq in 2003, the policy-makers of the day had not told allies in Old Europe who disagreed with that decision to take a hike.)

Saudi Arabia, which President Obama is visiting this week, is one, but by no means the only one, of those habitually labeled U.S. “allies” that is a subject of much hand-wringing over the less-than-harmonious state of its relations with the United States. Whenever the question is asked, about relations with the Saudis, what's in it for the United States, the answer inevitably turns immediately to oil. The specter of politically motivated embargoes is a residue of the 1970s that infects thinking on this subject. The shale oil revolution and other developments in the petroleum industry have changed greatly the dependencies involved in the four decades since then. It is true, as many observers have noted, that the U.S. interest in undisturbed oil exports extend to the entire global oil trade and not just to America's own imports. But the broader the base of customers importing Saudi oil, the less likely any new politically motivated embargoes would even enter into Saudi thinking. This dimension provides a reassuring thought even when thinking the unthinkable—about revolutionary change bringing hostile and radical elements to power in Arabia—in which scenario the new rulers would also have incentive to keep selling the oil. They could not drink it.

It is appropriate to think of such transactions with Saudi Arabia in market terms. The customers get the oil, but they pay good money for it, which is what has made the Saudis rich. The same frame of reference can be applied to part of what Saudi Arabia gets out of the United States—viz., a steady supply of advanced armaments—for which the Saudis also pay good money. Buyers and sellers, each acting out of their own interests. That's how markets work. No special deference or “alliance” labels are necessary.

Cooperation in counterterrorism is another subject that sometimes is mentioned in connection with the U.S.-Saudi relationship. But no “alliance” is necessary for effective counterterrorist cooperation, the vast bulk of which takes place behind closed doors. Much effective counterterrorist cooperation does take place, not only between states that are not considered allies but even between ones that are generally considered to be adversaries and to have sharp, open disagreements between their political leaders.

An added twist regarding terrorism is that, looking at the bigger picture, Saudi Arabia has been more part of the problem than part of the solution, especially in fostering an intolerant brand of Islam and in the Saudi regime's earlier efforts to export its radicalism problem to someone else's homeland. The uncomfortable truths on this subject are reflected in Riyadh's panicky response to the legislation pending in the U.S. Congress about letting culpability for 9/11 become a matter of private lawsuits against foreign regimes.

Current unhappiness of the Saudi regime about the United States involves matters on which the United States and Saudi Arabia do not share interests, and on which U.S. interests would not be served by deferring to Saudi wishes. Such deference would, among other things, complicate the counterterrorist mission. It would do so in Syria, where the Saudi fixation on overthrowing the Assad regime already has been a major complication in dealing with the problem of ISIS. It certainly is so in Yemen, where the Saudi-led military intervention has given a major boost to AQAP—Al Qaeda in the Arabian Peninsula, a group that has attempted multiple attacks against the U.S. homeland.

The Saudi displeasure centers in particular on wanting the United States to take its side in regional rivalries, especially its rivalry with Iran. It is not in the U.S. interest to take either side in such a contest for local influence, any more than it is for the United States to succumb to the zero-summing proclivities of Pakistan and India in their rivalry in South Asia. If the United States were to take a side in the Persian Gulf rivalry, what would justify siding with the Saudis? It wouldn't be a matter of countering a destabilization of the region; in the most consequential war going on in the Middle East right now, it is the Saudis, not the Iranians, who are supporting rebels trying to overthrow the incumbent regime. It would not be a matter of countering the sheer destructiveness of external mucking into internal wars; the direct Saudi military intervention in Yemen has been much more destructive, to the point of generating a humanitarian crisis, than anything that can be attributed to indirect Iranian involvement in the form of aid to the Houthis. It would not be a matter of countering the projection of military power that props up a minority regime and suppresses popular sovereignty; it was the Saudis, not the Iranians, who rolled their tanks across the causeway into Bahrain. It would not be a matter of countering the spread of strategic ballistic missiles in the Middle East; the Saudis were way ahead of the Iranians in introducing such weapons when they purchased CSS-2 intermediate range ballistic missiles from China years ago.

Neither would it be a matter of siding with the regional contestant who shares more values with the United States. The family-run Saudi regime is one of the least democratic in the world, reigning over a society in which there is no freedom of religion and significant constraints on other personal liberties. Again by way of comparison, the Islamic Republic of Iran, for all its major domestic faults, is less distant from the West in these respects than Saudi Arabia is.

And siding with Riyadh in its local rivalries would not be a matter of doing so because of anything special that the United States is getting out of the relationship in return.

It is in the interests of both the United States and Saudi Arabia to have a businesslike relationship in which leaders and diplomats of the two countries regularly engage on the full range of issues that concern them. If the Saudis are unhappy that the relationship isn't any warmer, fuzzier, or more alliance-like than businesslike engagement, that is a reflection of the divisions of interests between the two countries, and of the fact that the Saudis need the United States more than the United States needs them. It also is a reflection of U.S. policy-makers having their priorities straight and not being confused by habitual labeling of “allies.” If there doesn't seem to be a lot of harmony in U.S.-Saudi relations these days, there is nothing particularly wrong with that.