What Putin Needs to Negotiate a Deal on Ukraine 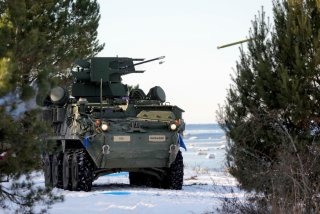 One of the biggest questions about the war in Ukraine at this point is what Russian president Vladimir Putin’s exit ramp would look like. He has too much of his standing and prestige invested in this expedition for the United States and its allies to expect him to execute a U-turn and a tail-between-the-legs withdrawal, even if Ukrainian resistance were to continue being as stubborn and effective as it has been so far. For any outcome to be acceptable, Putin has to be able to portray himself, with the aid of his propaganda apparatus, as a winner.

The terms of any negotiated settlement of the war are obviously a major part of this. As many commentators have suggested, some formula that involves Ukrainian neutrality and recognition that Ukrainian entry into NATO is not in the cards is essential if such a settlement is to be achieved.

But the course of the war itself matters too, and not only in the sense that if the war turns too sharply in Russia’s favor, Putin is likely to think more about what he would have the power to impose unilaterally and less about what compromises he might have to accept. Alternatively, if the war goes too poorly for Russia, Putin might have less interest in negotiating. Putin has to be able to portray himself—again, with a propaganda boost—as the diplomatic and military victor.

Much attention has been directed at Putin’s idiosyncrasies as a decisionmaker, namely, his apparent isolation, reliance on a small circle of advisers, and fixation on the loss of the Soviet empire. But some suggestions of how the war’s future military course may affect diplomacy can be gleaned from other wars involving different belligerents. In general, the condition necessary for both belligerents in any war to be interested in negotiating a peace deal at the same time is usually described as a mutually hurting stalemate. This concept requires some more explanation in the present context, however, because if a stalemate were simply an extension in time of where the front lines are right now, this probably would be generally regarded as a loss for Russian forces.

Often what is needed for a mutual interest in negotiations is not just a stalemate but a testing and exhaustion of military possibilities that both sides hoped would break them out of a stalemate.

If the military tide turns markedly in one side’s favor, it would likely view negotiations as unnecessary to achieve its objectives. Conversely, the losing side with an unfavorable military advantage could also be uninterested in negotiations because it would be bargaining from a position of weakness. The losing side would want to expend more military effort to strengthen its negotiating position first.

The back and forth of the military tide in the first year of the Korean War is illustrative of this dynamic. During the first year, the war was either going too well or too poorly for either side to make negotiating an armistice possible. In the initial phase of North Korean forces sweeping through the South, it was going well for the Communists and poorly for the United Nations (UN) forces. After Gen. Douglas MacArthur’s Inchon landing reversed that tide, there was a brief period when the Communists were interested in peace talks, but by then the war was going too well for the UN side, as the liberation of North Korea seemed within reach. The Chinese intervention reversed the tide again. It wasn’t until UN forces stopped the Chinese advance and pushed the front line back to near where it was at the start of the war that both sides concluded they had exhausted the possibilities for a military victory and they sat down to negotiate.

The dynamic that the Korean War exhibited involves the perceived bargaining strength each side will have when they negotiate. Another factor that is often in play concerns the pride and reputation of a military force and the nation that wields it. Egyptian president Anwar Sadat initiated the 1973 Arab-Israeli War mainly to restore the prestige of Egypt and its military after suffering a humiliating defeat against Israel in 1967. At the time an armistice ended the fighting in the 1973 war, Israel was winning, but Egyptian forces had made a respectable enough showing earlier in the war to redeem their reputation and permit Sadat to hold his head high when he later traveled to Israel to begin negotiating a peace treaty.

Similar factors are apt to apply to Putin and the Russian military. To accept any negotiated end to the war, the Russian president probably needs his forces to withdraw from Ukraine with their reputation intact. This will not only affect any negotiations over the status of Ukraine but also for other conflicts and issues in which Russia may become involved.

Even if Putin already has done some recalculation after his military expedition in Ukraine encountered more difficulty than he may have anticipated, and even if he is thinking seriously about compromising with the Ukrainians, he probably sees a need to inflict more punishment and take more territory before sitting down to negotiate.

The bad news is that this would mean more war, more destruction, and more suffering for Ukrainians (and for Russian soldiers). Obviously, it would be better for all concerned if this did not prove to be the case.

The good news is that such additional Russian offensive actions would not necessarily imply increasingly expansive Russian objectives. But Western governments and the Ukrainians will have to recognize that possibility and not mistakenly assume the worst about Putin’s intentions.