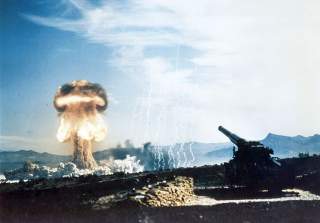 The Trump administration’s handling of nuclear negotiations with Saudi Arabia promises to lay bare some realities about security issues and nuclear programs in that part of the world that the administration has refused to acknowledge. A front-page article by David Sanger and William Broad in the New York Times reviews some of the still-unresolved questions. The Saudi regime insists on producing its own nuclear fuel, which would be different from terms the United States has negotiated with some other states, including the United Arab Emirates, that have sought U.S. assistance in developing their nuclear programs. The Saudis have balked at comprehensive international inspections to detect any work on nuclear weapons. And Saudi Arabia’s Crown Prince Mohammed bin Salman (MbS) has explicitly threatened to develop nuclear weapons, ostensibly in response to any similar development by Iran.

A useful model for approaching this situation involves Iran. The model is the Joint Comprehensive Plan of Action (JCPOA), the multilateral accord commonly known as the Iranian nuclear deal, which Donald Trump has castigated and on which his administration has reneged by imposing new economic sanctions despite continued Iranian compliance with the JCPOA. The JCPOA closed all possible pathways to development of an Iranian nuclear weapon through stringent restrictions on enrichment of uranium, the gutting of reactors that otherwise might be used to produce plutonium, and the prohibition of any reprocessing by Iran of nuclear fuel. The agreement also established a thorough inspection system that involves not only routine monitoring of nuclear facilities but also the ability of international inspectors to inspect any other sites they may have reason to suspect are housing nuclear-related activity, with the other parties to the agreement being able to outvote Iran in the event of disagreement about the relevance of a requested inspection. This is the kind of highly intrusive inspection arrangement that the Saudis reportedly are refusing to apply to themselves.

The principal U.S. negotiator has been Secretary of Energy Rick Perry, for whom this is a learning-on-the-job experience. Perry was initially unaware of the Department of Energy’s nuclear responsibilities and believed his job would consist of promoting the oil industry. (This contrasts with Perry’s predecessor, Ernest Moniz, a nuclear physicist who played a key role in negotiation of the highly detailed JCPOA.)

Although few details of the negotiations have been made public, the New York Times reports that Perry has been discussing with the Saudis a possible agreement that would place a time limit of ten to fifteen years on any restriction of Saudi fuel production. Ironically, this is the same time frame as the “sunset clauses” that apply to some (though not all) of the provisions in the JCPOA regarding uranium enrichment and that have been a focus of attack by opponents of the JCPOA.

The Saudi regime has been making noises for several years about wanting to “get whatever Iran gets,” as if the JCPOA involved Iran getting something nuclear rather than having its nuclear program set back and restricted. A reasonable U.S. response to such talk would be to say, “All right, you can have an agreement with terms that match what is in the JCPOA.” This would mean, besides strict limits on the amount and level of uranium enrichment, a total ban on domestic reprocessing of spent reactor fuel. So Riyadh would have to discard its dreams of using reactors to make its own nuclear fuel. It would mean the same sort of far-reaching inspection arrangement to which Iran is subject, including challenge inspections of undeclared facilities. And it would mean no assistance from the United States in the form of reactor sales or other help in developing a nuclear program. Saudi Arabia would not “get” anything nuclear from the United States because under the JCPOA Iran didn’t get anything nuclear from the United States either.

Although Iran under the shah got a head start over its cross-gulf Arab neighbors in developing a nuclear program, Saudi Arabia has long presented at least as much of a legitimate worry about nuclear weapons proliferation. Riyadh’s security ties to Pakistan—whose nuclear weapons program, producing the first “Islamic bomb,” the Saudis financed—have provided Riyadh with a valuable chip that it undoubtedly would cash in if it decided to go the same route.

Amid all the talk among opponents of the JCPOA about ballistic missiles, it is worth noting that Saudi Arabia has been ahead of its regional neighbors on that count as well. Two decades ago, Saudi Arabia secretly purchased medium-range missiles from China that, although reportedly configured to carry conventional weapons, were of a type originally designed to deliver a nuclear warhead. The Saudis in more recent years have modernized their missile force, again relying on China as the supplier.

Destabilizing regional activity also implies that Saudi Arabia is more of a worry than most states regarding the implications of possible acquisition of nuclear weapons. Saudi Arabia has bombed Yemen into becoming a humanitarian catastrophe, has kidnapped and attempted to coerce into resignation the prime minister of Lebanon, and has used diplomatic facilities in foreign countries to assassinate nonviolent dissidents. The impetuous young prince behind these policies has been moving toward one-man rule, shedding even the restraints of what had been a collective family autocracy.

The murder of Jamal Khashoggi has drawn some recent and welcome attention to this pattern of behavior, although it has not budged Donald Trump from his stance of sticking with MbS no matter what he does. California Rep. Brad Sherman has appropriately observed, “A country that can’t be trusted with a bone saw shouldn’t be trusted with nuclear weapons.”

The administration’s assault on the JCPOA may provide the trigger for Saudi Arabia to try to obtain such weapons. If the U.S. “maximum pressure” campaign succeeds in negating completely the economic relief Iran was supposed to have received under the JCPOA, then Iranian leaders may yet throw up their hands in disgust and pronounce the agreement null and void. This would release Iran from all its nuclear restrictions under the agreement, which in turn might provide the perfect rationale for Riyadh, especially as long as MbS is in charge, to acquire the bomb.