Why Trump Likes the Military 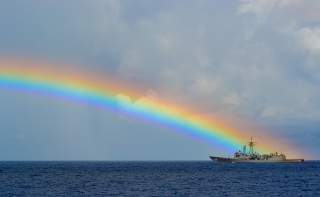 Consider this major disconnect.  On one hand, President Trump presents a proposed budget that calls for a major increase in spending on the military, even while drastically slashing funding for huge parts of much else that the federal government does.  On the other hand, his first address to Congress says almost nothing about foreign policy and provides almost no explanation of what supposedly requires that expansion in the military and how it is to be used.  Conspicuous by its absence is a strategic rationale from this administration that lays out how an expanded U.S. military would be part of a larger, well-thought-out foreign and security policy.

There is not, in fact, a sound rationale for such an increase in the U.S. military budget, which already is larger than the budgets of the next seven biggest military spenders combined, including potential adversaries China and Russia.  As veteran defense budget expert Gordon Adams observes, the U.S. military is not unready and not “hollow,” and threat is not driving the proposed budget increase.  Adams writes, “If readiness is defined as forces ready to do battle in central Europe, which it still largely is, then we don’t have that and, arguably, don’t need it, either. But if readiness is defined as forces that can be used where they are being used—in regional theaters, in small numbers, as part of counter-terror/counter-Islamic State operations—then we have the most ready force we’ve ever seen.”

We all know there is a bigger and longer story to this beyond Donald Trump, and Senate Armed Services Committee chairman John McCain, among some others, favors an even bigger increase in military spending.  Lest we forget, back during Barack Obama’s administration, amid much deficit hawk-squawking from Congressional Republicans and threats from them to shut down the government or default on debts, a budget “sequester” that imposed new limits on military and non-military spending alike was used as a way out of the obstruction and an incentive for members to agree on an ultimately still elusive budget compromise.  My, how long ago that seems, and how easily it is forgotten.

But as with almost everything else that Donald Trump says and does, the best explanations center on how, with this narcissist, it’s all about him.  He likes to boost the military, and associate with the military, because the military is the most conspicuously strong thing America has, and some of that strength will appear to rub off on him.  Columnist Frank Bruni captures some of this when he writes, “Why do I get the sense that fighter jets are Donald Trump’s biceps, warships are his pectorals and what he’s doing with his proposed $54 billion increase for the Pentagon is flexing?  Maybe because that’s a strongman’s way. Maybe because so much with him is preening. Or maybe because so little of his military talk adds up.”  Bruni’s metaphor of body parts is appropriate because the personal needs of Trump that are involved are essentially the same ones that underlay his concern with other body parts during the primary campaign.

A further purpose involves Trump’s status as the only U.S. president to enter office with no prior public service, not even as a private in the army.  So this is a gap for which he needs to compensate.  He surrounds himself with those from the profession that is most associated in American eyes with selfless public service.  Even more so than budget proposals, his appointment of a disproportionate number of what Trump calls “my generals” to senior positions serves this purpose.  (An admiral whom he asked to join the group understandably declined.)  Trump is effectively wrapping himself in these officers’ uniforms in the same way the flag is sometimes used for such wrapping.  Trump wanted Michael Flynn to work in uniform as national security adviser until Flynn pointed out that he couldn’t because he was retired from active duty.

Visibly embracing the military is for Trump a substitute, not an accompaniment, for rigorous thinking and questioning about how that military is to be used.  As with most other things involving Trump, the show is more important to him than the substance.  That is another way in which the association with the military exploits the colloquial and respectful, rather than critical, way in which most Americans regard the military.  Most fans at the ball park do not think strategic and rigorous thoughts about use of the military when they participate in honoring service members in attendance.  Most air travelers probably do not think such thoughts as they wait for active duty military members to board the plane ahead of them.  And as president, evidently Trump does not think such thoughts either.

The lack of rigor in thinking in the Trump administration about use of the U.S. military extends to specific decisions as well as to overall strategy—at least given the experience of the first Trump-ordered operation in which a member of the U.S. military was killed in action: a raid in Yemen in late January.  The decision process leading to the order to launch the raid was disjointed and perfunctory—a far cry from the thorough process that proceeded such decisions in the Obama administration, but consistent with the haphazard approach to executive orders on other topics during the first month of Trump’s presidency.

The aftermath of that raid has illustrated some other things about Trump’s use of the military—“use” in this instance referring to what serves Trump’s personal purposes, rather than to any larger political-military question about serving U.S. interests.  Being seen as deferring to military expertise and judgment absolves Trump from any accusation of acting on his own whims, while shifting blame for failure even when the decision that most matters has to be taken at the presidential level.  In an interview with Fox News after the raid, Trump washed his hands of any responsibility for the death of the Navy SEAL who was killed in the operation, saying it was “the generals,” who “are very respected,” who “lost Ryan”.  This, too, has already become a pattern with Trump, who doesn’t hesitate to claim credit for business decisions and trends that began months ago and all sorts of other things he had nothing to do with, but has no awareness of the sign about buck-stopping that Harry Truman kept on the presidential desk when it comes to accepting responsibility for things that do not go well.

Trump’s handling of the aftermath of the Yemen raid continued in his address to Congress, which included a treacly and exploitative reference to the SEAL’s death as one more way to try to get some dust from, in words from the speech, “the heroes who wear our uniform”.  We should have extra sympathy for the widow of Chief Owens, not only for the death of her husband but also for being used as a prop and having to struggle to keep her composure during this part of the presidential performance.  Trump quoted “our great General Mattis” about what a success the raid supposedly was.  Nothing was said, of course, about the fallen serviceman’s father—himself a military veteran—questioning the wisdom of the raid, and apparently doing so with good reason in terms of how much good the raid actually did or did not do.

Trump even applied to this episode the standard for success or failure he usually applies to anything: how much here-and-now expression of support he sees and hears from an audience.  In an ad lib comment, he said that Chief Owens was looking down and “he is very happy because I think he just broke a record”—an apparent reference to the length of the applause in the House chamber.  One cringes in wondering what the widow must have been thinking at that point in the show.

We are barely at the beginning of Donald Trump’s very personal use of the U.S. military in his role as commander-in-chief.  As troubles in his presidency mount and with them so do his needs to compensate, distract, or rationalize, the potential for uses of that powerful instrument that can be far more damaging will also increase.  Upping the military budget probably will only increase the temptations for him to use the military that way.

Image: A naval ship sails across the ocean. Pixabay