Will Brazil Succumb to Authoritarianism? 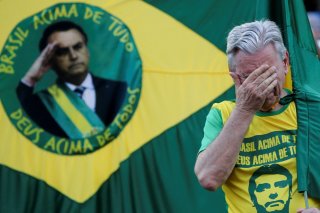 Enough worrisome things, carrying the threat of escalation into an even bigger crisis, are occurring overseas right now—especially Russia’s war in Ukraine, and also heightened tensions over Taiwan—that there might be little room left for worrying about most foreign elections. And to the extent one election is currently passing the worry threshold for Westerners, it probably is the just-completed one in Italy, which is bringing to power a far-right coalition led by a party with neo-fascist roots.

But make room for a possible crisis associated with next month’s elections in Brazil, the seventh most populous country in the world. Brazilians vote for president, the national legislature, and various other offices on October 2. If no presidential candidate wins a majority, the top two finishers will compete in a runoff on October 30. There are good reasons for even those who usually pay little attention to Latin America to be concerned.

The two major presidential candidates are incumbent Jair Bolsonaro and former president Luiz Inacio Lula da Silva. Since taking office in 2019, Bolsonaro has assumed postures increasingly at odds with those of the United States as he has drawn closer to Russia and especially China, fellow members of the BRICS grouping of countries.

But even that positioning regarding great power politics is not the main reason to worry about this election. Two other reasons are.

One concerns the future of democracy, in the first instance in Brazil but with probably ripple effects elsewhere. Bolsonaro—the “Trump of the tropics,” as he sometimes has been called—has all but announced that he will not respect the result of the election if he loses. And polls show him trailing Lula by a significant margin.

It thus is probable that the Trump of the tropics, who has been emulating the Trump of North America with his claims of election fraud, will continue the emulation with attempts to overturn the election result and remain in power. This will mean Brazilian versions of January 6 and then some.

The United States narrowly escaped the collapse of its democracy because enough officials did their constitutional duty and functioned as a circuit breaker to avoid such a collapse. Brazil might not be so lucky. Its circuit breakers are likely weaker than those in the United States, and some of the ones that might be relied on to stop Bolsonaro’s excesses pose some of their own dangers to liberal democracy.

It was only in 1985 that Brazil emerged from a two-decade military dictatorship. The response of the military is one uncertainty, though hardly the only one, of the outcome of the likely attempt by Bolsonaro, a former army officer, to overturn the result of the coming election. Given Brazil’s size and weight, a new collapse of democracy there is bound to have repercussions elsewhere.

The other reason for worry concerns the future health of the planet. Bolsonaro has been an outspoken climate change denier. He has appointed cabinet-level officials with a similar attitude. This has been bad news for the Amazon rainforest, the largest portion of which is in Brazil. And that rainforest plays a critical role as part of the global ecosystem.

The exact environmental significance of the Amazon rainforest has been the subject of some pointless rhetorical digressions, but a few facts are critical. Deforestation of the Amazon has been a problem for years, since well before Bolsonaro came into office. Deforestation in the Brazilian portion of the rainforest has accelerated in recent years, however, in response to Bolsonaro’s policies. As a result, although the Amazon rainforest as a whole has long been a major absorber of carbon dioxide, during the past two years the Brazilian portion of it became a net emitter of CO2.

Everyone in the world needs to worry about that exacerbation of the problem of greenhouse gasses and global warming. Climate change is the ultimate existential issue that knows no international boundaries.

None of this constitutes a rationale for foreign interference in Brazil’s election. And Lula as president probably will implement some policies that the United States, among other countries, won’t like. But it is neither election interference nor favoritism toward one candidate over another if, after the Brazilian people have spoken with their votes, the United States and other foreign governments do what they can to support those Brazilians who want to uphold their democracy and prevent Bolsonaro from stealing the election and pulling the country into authoritarianism.

The United States helped to pull Brazil into an earlier period of authoritarianism when, disliking the leftist policies of President Joao Goulart, it supported the coup that brought the Brazilian military to power in 1964. It can partly compensate for that piece of history by helping Brazilians prevent something similar from happening again.