William Barr: Much More Than Just a Lawyer 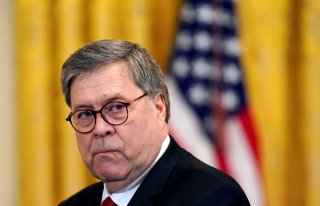 Attorney General William Barr recently said on Hugh Hewitt’s radio program that not only would lawsuits be in order against state governments to contest some of the restrictions aimed at curbing COVID-19 infections, but that the Department of Justice (DOJ) might enter such cases to support the suits. Everyone knows what is the basic, and very difficult, decision that governors are having to make in dealing with the COVID-19 pandemic. They must weigh the need to restrict personal movements to slow the spread of the virus against the economic costs and personal hardships associated with lockdowns. As the top elected officials in their states, they presumably are best positioned to assess and prioritize the often-conflicting political, economic, and public health considerations involved. So why is the attorney general threatening to use legal tools to override the governors’ assessments and decisions?

Conceivably constitutional issues regarding limitations on personal liberties might be involved, but the challenge of COVID-19 is a life-or-death problem that quite understandably has not hitherto been framed mainly as this kind of legal question. In the interview, Barr unhesitatingly went beyond legal issues to second-guess the governors on substantive judgments. He said “we have to use less intrusive means if they are equally effective in dealing with the problem,” and declared that measures already taken “are bending the curve, and now we have to come up with more targeted approaches.”

An expansive and very flexible view of his role has been a pattern with Barr since becoming Donald Trump’s attorney general. The Department of Justice is supposed to be all about compliance with, and enforcement of, the law, not about substantively mucking into the business of other parts of government. Within DOJ, the Office of Legal Counsel (OLC) has the job of providing advice about what is legal with regard to the activities of the federal executive branch. This arrangement is supposed to ensure that the executive stays on the straight and narrow in not twisting the law to accomplish other ends. But what happens when OLC itself, which answers to the attorney general, is doing the twisting?

That’s what happened with the handling of the whistleblower complaint that led, after further investigation, to Trump’s impeachment. The law under which the intelligence community’s inspector general operates obligates him to forward such complaints to Congress if he assesses, as former IG Michael Atkinson did, that the complaint concerns a matter that is important and urgent. OLC under Barr, as part of an administration effort to block inquiries into Trump’s Ukraine caper, offered a different assessment. Public knowledge of the existence of the complaint and a subsequent outcry led to the complaint finally making it to Congress anyway, but Barr still defends Trump’s purge of Atkinson by saying that the IG should have followed OLC’s lead.

The second-guessing has taken the form of not only questionable OLC opinions but also ad hoc investigations. Barr has dispatched a prosecutor to second-guess the intelligence community’s substantive assessments about Russian interference in the 2016 election. This is another instance of Barr’s attempt to claim a lawyer’s jurisdiction over someone else’s judgments that involve non-legal criteria and expertise.

Barr at his most expansive has dispensed with trying to apply a legal gloss and has dived right into other matters that are not part of an attorney general’s job description, such as with his appeals to put more religion into American public life. A proper legal perspective on that subject would center on the only place in the U.S. Constitution that mentions religion, which is the First Amendment’s ban on the establishment of religion and on infringements of the free exercise of it. The constitutional principle, in other words, is about keeping government out of religion, not inserting government into it, which is what Barr appears to be doing.

What ought to be the common thread in everything an attorney general does is upholding the Constitution and statutory law. The common thread of what Barr has done as attorney general has instead been to provide political cover for Donald Trump. This has included Barr’s misleading public description of Robert Mueller’s report on the Russian election interference. It has included Barr’s support for Trump’s efforts to discredit investigations into that interference and impede investigations into the Ukraine affair. Even the preaching about religion—however much it may reflect Barr’s personal religious beliefs—serves to strengthen Trump’s political standing with his evangelical base.

Now Barr is talking about using the power and resources of the Department of Justice to support those resisting the tough lockdown decisions that some governors have made in the interest of public health—resistance that is more Astroturf than grass roots. Barr’s boss the president has egged on the resistors with tweets calling to “liberate” certain swing states led by Democratic governors—even though those states are acting in accordance with federal guidelines regarding the loosening of economic restrictions during the pandemic, and even though Trump has taken a much different approach in states with Republican governors.

If, amid all this, Barr really wanted to do something to uphold the law, he would not be talking about filing briefs in support of rent-a-mobs in state capitals. He would consider how Trump’s incitement, with references to guns amid the calls to “liberate” states, is the sort of call to insurrection that courts have determined is not protected speech.

Attorney General Barr’s shaping of his role has sweeping and profoundly negative implications. It is a blow to the rule of law. Foreigners are taking notice. They can add this blow to their overall dismay with the sort of leadership the supposed leader of the free world has been exercising lately. The Europeans have had to deal with increasingly authoritarian regimes in Hungary and Poland that use ostensibly legal tools to quash opposition in ways that actually undermine the rule of law. Now they are hearing echoes of such misuse of the law on the other side of the Atlantic.