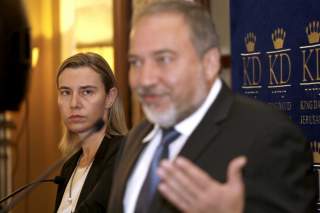 A common theme in commentary about implications of the Brexit vote last week is that both the European Union and Britain will be so preoccupied with sorting out whatever will be Britain's new relationship with Europe that they will have a deficit of energy and attention to devote to other matters. Paul Scham of the Middle East Institute applies this thought to diplomacy aimed at resolving the Israeli-Palestinian conflict, writing that “it seems unlikely that the EU will be willing or able to focus on Israeli-Palestinian issues for the foreseeable future.” He expects that members of the Israeli government are feeling relieved about that. He no doubt is right on that last point; the Israeli government does not want any diplomacy aimed at ending the occupation of Palestinian territory, and it has been fighting hard to defeat the recent initiative by the French on the subject.

But although the general idea of limited time and attention is valid, there is more that the Europeans can, and should, do in making progress on other diplomatic matters, and on the Israeli-Palestinian matter in particular. Look beyond the discombobulation resulting from the British vote and one can see that the initial reactions to the shock of last Thursday probably have underestimated the ability of the Europeans to walk and chew gum at the same time. Moreover, it will sink in over the coming weeks that Britain might never actually leave the EU. Boris Johnson has good reasons to be waffling the way he has since the vote.

European statesmen also will be able to understand that it is in the best interests of the European project for them not just to sit and stew about the little Englanders. Now more than ever, with doubts being voiced about the future of that project, there is a need for activity that will restore a sense of commonality and momentum to Europe. The EU needs good projects that will show that Europe as a collective enterprise is robust enough that something like the Brexit business will not screw up everything else.

Vigorous diplomacy aimed at resolving the Israeli-Palestinian conflict is one such project. As a candidate for EU efforts it has several attractions. The need for progress on the subject is as evident as it has always been—on multiple grounds, including justice, human rights, stability, and the curbing of extremism. The United States is, despite some encouraging evolution of attitudes in recent years, still hamstrung by its internal politics and for that reason unlikely to function effectively as a fair-minded outsider. Looking ahead past the U.S. presidential election does not give basis for hope that the United States will play such a role any better than it is now. With the United States self-crippled on the issue, the European Union is the next best actor to step into the role.

The EU already has been involved in diplomacy about the Israeli-Palestinian issue, including as a member of the so-called quartet along with the United Nations, United States, and Russia. And now with the initiative of France, one of the most important EU members, there is a ready-made current diplomatic vehicle for the EU as a whole to help drive.

So get out of the funk about Brexit and get going on this, Europe; you have an opportunity to do yourself good when you especially need it while also doing good about a problem on another continent that has caused grief for decades.