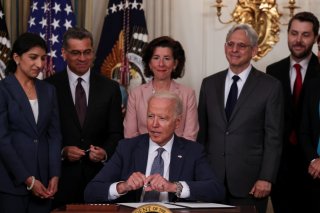 On July 11, 2021, President Joe Biden signed an executive order “promoting competition in the American economy.” The order includes seventy-two policy initiatives that focus on agribusiness, the healthcare sector, and the information technology sector. Many of these policy initiatives will focus on encouraging “vigorous” antitrust enforcement in industries and professions and “rigorous” pre-merger and acquisition reviews by the Federal Trade Commission (FTC) and the U.S. Department of Justice’s (DOJ) Antitrust Section. Other initiatives are regulatory in nature, focusing on labor market reforms and consumer protection reforms.

The Biden administration is concerned that “in over 75% of U.S. industries, a smaller number of large corporations now control more of the business than they did twenty years ago.” The administration’s emphasis on corporate consolidation and “big is bad” is reflected in President Biden’s favorable remarks on the antitrust enforcement efforts by former Presidents Theodore Roosevelt and Franklin D. Roosevelt. Biden views an America “40 years into the experiment of letting giant corporations accumulate more and more power” resulting in “less growth, weakened investment, [and] fewer small businesses.”

Under the order, DOJ and FTC antitrust enforcement efforts will focus on labor markets, agricultural markets, healthcare markets (including prescription drugs, hospital consolidation, and insurance), and the tech industry. The administration wants to “challenge prior bad mergers that past Administrations did not previously challenge.” Lastly, the Biden administration will establish a White House Competition Council that will monitor progress on finalizing these initiatives and coordinate the administration’s response to the rising power of large corporations in the economy.

The antitrust initiatives in the order reflect a return to the earlier (pre-1980s) “structural” approach to antitrust policy, whereby government intervention in industry-specific markets is intended to improve economic performance and further the social objective of limiting the concentration and abuse of economic power. Through antitrust policy enforcement, the unfair treatment of competitors, consumers, and society is ostensibly kept in check. This structural approach views the performance of markets as determined by participant conduct, which is primarily determined by the structure of the industry—consisting of the number of competitors and the existence of market entry barriers.

For example, the order focuses on hospital and Big Tech mergers and the resulting “harm” to patients and the “undermining [of] competition and reducing innovation” in the tech industry. The “greater scrutiny” mentioned in Biden’s executive order “encourages the Justice Department and FTC to review and revise their merger guidelines.” This use of language to pressure the antitrust agencies for “greater scrutiny” appears political in nature and is not reflective of the work in the “new industrial organization (IO)” approach to antitrust policy.

The new IO approach rejects the exclusive static market approach of the Chicago School, and focuses on industry strategic behavior—and thus incorporates static and dynamic market efficiency in its analysis. In addition, the new IO approach is concerned with the potential for anti-competitive market behavior—such as found in information technology—characterized by network externalities and where compatibility and standardization are required. The question remains: Will the review and revision of merger guidelines be based on sound economic research, or from politically motivated “big is bad” antitrust philosophy?

Other major “competitive” initiatives include a call for Congress to pass the Protecting the Right to Organize Act, characterized as an act “to ensure workers have a free and fair choice to join a union and to collectively bargain”; new legislation offered to appease a political ally, organized labor, in spite of long-established labor law ensuring such employee organizing and collective bargaining activities. Moreover, another initiative encourages the Federal Communications Commission (FCC) to restore “net neutrality,” which classifies internet broadband as a “common carrier” and regulates it as a public utility. As Susan E. Dudley, director of the George Washington University Regulatory Studies Center, notes: “The FCC’s 2017 ‘restoring internet freedom’ rule offered extensive economic analysis showing that light-handed regulation is more conducive to completion, innovation, and consumer welfare than regulation as a public utility.” The “apocalyptic” forecasts of the adverse effects of implementing the “restoring internet freedom” rule failed to materialize.

While the Biden order has all the major requisites expected of central planning (and further rule-based regulation), there is a theme among regulatory initiatives that will enhance “transparency” to enhance consumer comparison of prices for services and inform decision-making. These include having the U.S. Department of Health and Human Services (HHS) support existing hospital price transparency rules and the U.S. Department of Transportation consider issuing rules that require commercial airline baggage, change, and cancellation fees to be clearly disclosed to their customers. However, as Dudley astutely points out, the initiative to direct the HHS “to standardize plan options in the National Health Insurance Marketplace so people can comparison shop more easily “could limit the ability of insurers to offer coverage options that meet diverse situations and needs.” With this initiative, insurers should also offer the additional option of requested customized insurance plans.

The Biden order will no doubt receive major political opposition from the biopharmaceutical and information technology industries. For example, in a recent communique from the Computer & Communications Industry Association, the association announced that the “Biden executive order ignores dynamic tech competition and the value it adds for SMBs (small-and-medium businesses) and consumers.” This is just the beginning of a major lobbying campaign to politically mitigate the federal government’s regulatory overreach.

Thomas A. Hemphill is a professor of strategy, innovation, and public policy in the School of Management at the University of Michigan-Flint.