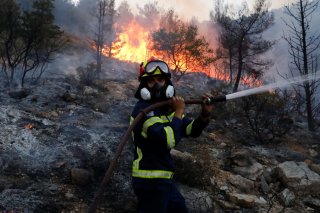 Amid what forecasters have described as “dangerous heat” across the Southwest, deadly wildfires broke out over the weekend in southern California, New Mexico, and Arizona.

New Mexico’s largest wildfire continued to burn Sunday, with 320,000 acres scorched. Federal and state fire officials said it had been 70 percent contained. The Pipeline fire in Arizona has taken over 1,500 acres and prompted evacuations for two neighborhoods. “Dangerous heat to continue across the Southwest tonight,” the National Weather Service said in its forecast Sunday.

As reported by Yahoo Finance, more wildfires could be expected in the coming weeks as more than sixty-five million Americans—many of whom reside in the western and southwestern states—are experiencing “severe to exceptional drought,” according to the National Oceanic and Atmospheric Administration (NOAA). “There are a lot of downstream effects when it comes to a drought like this,” Andrew Hoell, a co-lead on the NOAA Drought Task Force, told the news outlet. He added that drought conditions can be exacerbated by the evaporative effects of higher temperatures and insufficient snowpack runoff during winter.

“By the time it's summertime, that vegetation is really dry. And if you get a spark, and you get a series of unfortunate events in that regard, you then have wildfires,” Hoell said. “So, when it comes to drought in the West, there are just a variety and a spectrum of effects that you can feel later on whether it's water resources and fires and reduced agricultural yields. The effects are numerous,” he continued.

Although it might take some time, Hoell noted that rising temperatures due to climate change might mean that residents in these regions will have to just live with the risks going forward. “If I had to guess—and if there is a silver lining here — if we're to look at the next ten years, will they necessarily be as bad as the last ten years in terms of precipitation? I would say probably not,” he said.

However, the major issue “is the climate has not shown any indication of warming temperatures slowing down.” “That right there is a problem in and of itself because it changes the amount of snow that you get during the wintertime, changes the amount of snow that then makes its way into reservoirs, thereby replenishing them. So, we have these different factors that kind of commingled to bring together this hydrologic situation that is not ideal for us right now,” he concluded.