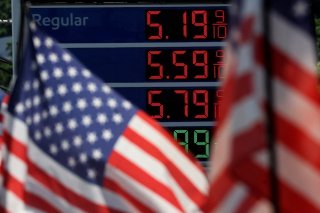 For the first time ever, a gallon of regular gas reached and surpassed $5 on average nationwide this past weekend, according to AAA data.

While there’s no question that this has left many budget-conscious American drivers frustrated, the ongoing pain at the pump is having a sizeable effect on some gas station owners as well.

For example, per Fox Business, Massachusetts gas station owner Reynold Gladu earlier this month emptied the pumps at his station and decided not to sell any more fuel to customers. After nearly fifty years in the business, “he could no longer go along with what he believed was an industry taking advantage of its customers,” the news outlet reported.

“I don’t want to be part of it anymore,” Gladu told the Daily Hampshire Gazette. “This is the biggest ripoff that ever has happened to people in my lifetime.”

He later took direct aim at ExxonMobil and accused it of raising its prices while the average American continues to suffer financially.

“I’ve served their product, but I refuse to do it anymore, because they’re only getting richer,” Gladu explained.

“Enough is enough. People shouldn’t have to pay these prices to go to work, to go to church, or to do whatever they have to do. It seems like the oil industry is in this together,” he continued.

Julie King, operations media manager at ExxonMobil, responded by saying that the oil company does not control pump prices.

“Service stations are individually owned and price their fuel based on local market competition and other business factors,” she told the Gazette.

“Prices at the pump are influenced by the price of crude, and wholesale price of products which fluctuate according to demand and supply factors—such as economic conditions and seasonal factors, fuel production, inventory levels, storage and transportation cost,” she added.

Such comments offer little solace to many Americans who already might be bracing for $6 per gallon of gas. Patrick De Haan, head of petroleum analysis at GasBuddy, has contended that demand must be reduced before people see any sort of relief at the pump.

“There has got to be some point where people start cutting back, I just don't know what the magic point is,” he told the Associated Press. “Is it going to be $5? Is it going to be $6, or $7? That's the million-dollar question that nobody knows.”

Natasha Kaneva, JPMorgan’s head of global commodities strategy, has recently predicted that the national average for regular unleaded will hit an eye-popping $6.20 per gallon by Labor Day. Similar calls have been made by other industry experts as well, including Tom Kloza, global head of energy analysis for the OPIS, which tracks gas prices for AAA.