17 Lawmakers Arrested During Abortion Protest in Front of Supreme Court 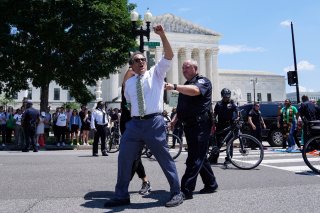 Capitol Police on Tuesday arrested more than a dozen Democratic members of Congress who took part in an abortion rights protest in front of the Supreme Court, CNN has reported.

The demonstration came nearly a month after the Supreme Court’s controversial decision to overturn Roe v. Wade, the 1973 landmark decision that established the constitutional right to an abortion.

During the protest, demonstrators marched from the Capitol to the Supreme Court, which has been fenced off for weeks following the leak of the draft decision overturning Roe. Within two minutes, police started ordering them to “cease and desist.” But they continued to sit on the street as they chanted, “The people, united, will never be divided.”

Capitol Police tweeted: “Demonstrators are starting to block First Street, NE. It is against the law to block traffic, so officers are going to give our standard three warnings before they start making arrests.”

In a statement released on Tuesday, Rep. Maloney asserted that “there is no democracy if women do not have control over their own bodies and decisions about their own health, including reproductive care.”

“​​The Republican Party and the right-wing extremists behind this decision are not pro-life, but pro-controlling the bodies of women, girls, and any person who can become pregnant. Their ultimate goal is to institute a national ban on abortion. We will not let them win. We will be back,” she added.

Rep. Escobar, whose state of Texas is expected to soon criminalize nearly all abortions via a “trigger law,” slammed efforts to strip women of their reproductive rights.

“My arrest today for civil disobedience was a small act in the centuries-long battle to ensure every woman has the freedom to make personal decisions with those they love and trust without politicians trying to control them,” she said in a statement posted on Twitter.

A spokesperson for Rep. Pressley said in a statement that the congresswoman participated in the protest due to the “cruel and callous decision to overturn Roe v. Wade and strip away abortion rights for everyone who calls America home.”

Meanwhile, Rep. Clark noted in a statement that “the extremist Republican Party is determined to take us back in time and take away our rights. I refuse to stand on the sidelines as their rampage continues.”

“They can arrest me, but we won’t allow them to arrest freedom,” she continued.