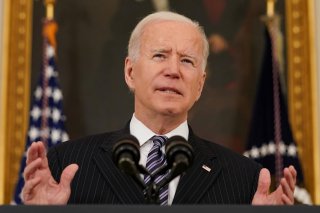 After Congress swiftly passed President Joe Biden’s $1.9 trillion coronavirus relief package in a starkly partisan effort, Democrats have already pivoted their energy toward another big-spending measure, with or without the support of Republicans.

The Democrats’ next legislative push is expected to be a two-part, multi-trillion infrastructure, jobs and climate change package that would pump federal funds into repairing damaged bridges and roads, expanding broadband access and investing in climate-friendly technologies, among other provisions. Specifically, some of the spending in the American Jobs Plan would send $621 billion toward transportation and infrastructure resilience; $213 billion toward the housing crisis and commercial properties; and $180 into research and development in climate-related technologies.

“Put simply, these are investments we have to make,” Biden said at a speech in Pittsburgh, referring to the bill. “Put another way, we can't afford not to.”

But to pay for the eight-year spending package, the White House proposed a slew of tax hikes that would hit wealthy Americans and corporations. Biden suggested boosting the corporate tax rate from 21 percent to 28 percent and global minimum tax from about 13 percent to 21 percent, measures that reverse former President Donald Trump’s 2017 tax cuts. The White House projects an eight-year spending effort, with the tax surges covering the cost over a fifteen-year period.

The president’s accompanying tax plan is unlikely to see bipartisan support, as several Republicans have already rejected the measure.

“That package that they’re putting together now, as much as we would like to address infrastructure, is not going to get support from our side. Because I think the last thing the economy needs right now is a big, whopping tax increase,” Senate Minority Leader Mitch McConnell (R-Ky.) told reporters last week.

Rep. Liz Cheney (Wyo.), the No. 3 House Republican, took to Twitter over the issue, dubbing the president’s bill a “nonstarter” and that it “would result in the largest tax increase in American history to pay for Green New Deal spending.”

Some GOP lawmakers are concerned over the Biden administration’s lack of effort in reaching across the aisle to draft a bill.

“A Senate evenly split between both parties and a bare Democratic House majority are hardly a mandate to ‘go it alone.’ The President should live up to the bipartisanship he preached in his inaugural address,” Sen. Mitt Romney (R-Utah) tweeted.

Biden, however, insisted that he is “going to bring Republicans into the Oval Office; listen to them, what they have to say; and be open to other ideas.”

But Democratic leadership in both congressional chambers appear to be ready to push through the bill, even if it’s without Republican support.

That would likely happen if Democrats and the Biden administration decide to once again use budget reconciliation, the same method used to jam through the relief bill last month, to pass the spending bill in the narrowly divided Senate, a legislative procedure that avoids a filibuster in the upper chamber. And the consensus on Capitol Hill seems that Senate Majority Leader Chuck Schumer (D-N.Y.) will likely use reconciliation if Republicans refuse to stand behind the measure, considering the Senate parliamentarian recently ruled that Democrats can use the wonky process multiple times this year to pass legislation.

At a minimum, Schumer can refer to budget reconciliation to avoid major procedural roadblocks on budget-related bills two more times this year.

Before the bill hits the Senate floor, it must see success in the House.

House Speaker Nancy Pelosi (D-Calif.) has set a deadline for the Fourth of July to pass the legislation, according to USA Today, but noted that the target date could extend to later in July.

Although Democrats hold a majority in the House, the party can only afford to lose just three votes before the bill hits a brick wall in the chamber.

If the legislation does pass in the House, then it will head toward the Senate, where Schumer and Democrats will likely send the bill to Biden’s desk via budget reconciliation. But, Democrats may see some resistance from members of their own party, including Sen. Joe Manchin (D-W.Va.), a centrist, who have indicated that they’d like to see bipartisan support for the measure.

“Once again we're back on Joe Manchin watch,” Jonathan Krasno, a political science professor at Binghamton University, said. “I think history should be our guide. He also wanted bipartisan support for the Covid bill and he didn't like certain parts of it, but when push came to shove, he provided the fiftieth vote for Biden to get the vast majority of what he proposed.”

Krasno added that he expects Manchin will make the same move for the infrastructure bill.

“Manchin has said he wants a big, bold infrastructure bill, but there's no way Republicans will come to the table with anything close to that. So there will be some adjusting around the edges in both House and Senate, but I think it'll be another party-line vote. After all, this proposal is currently about as popular in the polls as the Covid bill was,” Krasno said.

There are also several limitations over what can and can’t be featured in the spending package, provisions that are determined by the Senate parliamentarian. The process also allows any senator to call for a vote on an amendment in the bill, titled “vote-a-ramas,” that could last for hours.

While it’s unlikely that the infrastructure bill will be a bipartisan effort, the White House could see Republican support if the measure becomes more “targeted towards road and bridges” and if Democrats cut or largely reduce the massive tax surges.

Sen. Mike Braun (R-Ind.) told USA Today that although “we need to update our infrastructure,” this plan “must be targeted towards road and bridges and not used as a vehicle for irrelevant liberal policies that raise taxes on America's job creators and their families.”

Experts, however, don’t expect Republicans to back the bill.

“I don’t think there's any chance of getting any Republicans on board for an infrastructure bill of this scope. The party is dug in in opposition to Biden and recognize that they won't share credit for this no matter what they do. The more pertinent question is whether members will be hurt for voting against things their constituents like, but all of that is in the future,” Krasno said.

Biden is expected to release the second component to his plan in the upcoming weeks, which Congress will then move to hammer out the details of the package and turn it into a bill. White House press secretary Jen Psaki said last week that the administration would like to see “progress by Memorial Day” and an approved package by summer.