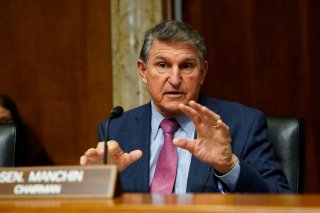 Sen. Joe Manchin (D-WV) delivered a surprise victory to President Biden’s legislative agenda Wednesday, reaching an agreement with Senate Majority Leader Sen. Charles Schumer (D-NY) on what is being described as the Inflation Reduction Act of 2022.

“The Inflation Reduction Act of 2022 will make a historic down payment on deficit reduction to fight inflation, invest in domestic energy production and manufacturing, and reduce carbon emissions by roughly 40 percent by 2030,” according to a statement from Schumer’s office. "The bill will also finally allow Medicare to negotiate for prescription drug prices and extend the expanded Affordable Care Act program for three years, through 2025.”

The bill, if it passes, would go through the reconciliation process, meaning it is not subject to the filibuster and can be passed through the Senate with fifty votes, requiring Vice President Kamala Harris to break the Senate tie, assuming a party-line vote.

According to CNBC, the bill is more than 700 pages long.

“Additionally, the agreement calls for comprehensive Permitting reform legislation to be passed before the end of the fiscal year. Permitting reform is essential to unlocking domestic energy and transmission projects, which will lower costs for consumers and help us meet our long-term emissions goals,” the statement continued.

The deal contains some remnants of what was called the Build Back Better Act last year, consisting of much of the president’s planned social spending agenda. Climate change, prescription drugs, and Affordable Care Act subsidies were part of that package.

As reported by the New York Times, which cited a spending summary released by the democratic-led Senate, the bill “would set aside $369 billion for climate and energy proposals, the most ambitious climate action ever taken by Congress, and raise an estimated $451 billion in new tax revenue over a decade, while cutting federal spending on prescription drugs by $288 billion.”

But one thing missing is the expanded child tax credit, which was part of the bill until Manchin came out against it last December. The senator has cited inflation various times when announcing his opposition to past versions of the legislation.

Manchin, in fact, had reportedly told colleagues that he feared recipients of the direct payments of the child tax credit would spend the money on drugs.

The West Virginia senator issued a statement of his own Wednesday.

“Over the last year, leaders in Washington have ignored repeated warnings about the severe threat of inflation and the consequences of unprecedented domestic spending. Despite these concerns and my calls to give the country time to fully realize the impacts of such historic levels of spending and our inflation crisis, many Democrats have continued to push for trillions more in spending to meet a political deadline. As difficult as it is for some to hear, political calls to action that ignore the severity of the crises we face and will continue to face are a recipe for national disaster,” Manchin said.

If passed, the bill would give Democrats an accomplishment to run on in the midterm elections, while also possibly doing something about inflation, as well as climate and prescription drug costs.