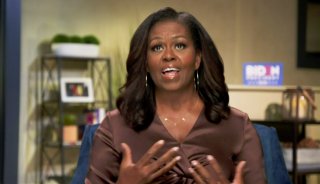 Viewership for the first night of the Democratic National Convention experienced a sizable drop on major broadcast and cable news networks compared to the same night in 2016.

Networks that faced the largest plummets are ABC, CBS and NBC as the trio had a combined 6.7 million viewers -- a 42 percent decrease from the 2016 convention -- with ABC in the lead with about 2.44 million viewers and NBC and CBS trailing behind at 2.28 million and 1.99 million, respectively.

MSNBC towered over the other networks with the biggest audience of around 5.2 million from 10 p.m. to about 11:15 p.m. eastern time. CNN followed with 4.8 million viewers and Fox News averaged about 2.1 million. Although the three attracted more than 10 million viewers, they collectively experienced a 16 percent decline in comparison to the first night of the convention in 2016.

ABC, CBS and NBC each hovered around 2 million viewers, according to the Nielsen data.

The data, however, doesn’t include online streaming viewership. CNN reported it had more than 70,000 online live-stream viewers in an average minute during the entire event -- a 28 percent increase from four years earlier.

The drop in viewership is not surprising considering the event wasn’t live due to coronavirus safety concerns and because there has been a steady dribble in television viewership with the emergence of online streaming platforms.