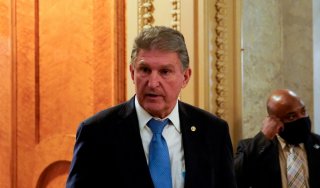 A big part of the Biden administration's domestic spending agenda has been a continuation of the expanded child tax credit. That credit, which mandated direct payments to parents each month of the year between July and December, came into being with the American Rescue Plan Act, the bill that passed in March 2021 as a major COVID-era rescue package.

And now, it appears that extension may be dead, following the declaration this weekend by a key senator that he opposes the bill.

Sen. Joe Manchin (D-WV), is seen as a possible obstacle to the passage of the package. Machin announced in a Fox News interview Sunday that he was opposed to the Build Back Better package. The announcement came after months of negotiations between the White House and Manchin, in order to reach a version of the bill for which Manchin would agree to vote. His rejection leaves virtually no path for the major Biden agenda item to pass Congress unless the White House could persuade a Republican senator or two to support the legislation.

It already looked unlikely, even if the bill had passed the Senate, for it to be in place in time for the child tax credit payments to continue without disruption in January. But now, those who have counted on those payments will be without them, starting next month.

According to one report, part of Manchin’s motivation for opposing the legislation has to do with the child tax credit itself.

The Huffington Post, citing two sources familiar with the matter, reported that Manchin had told colleagues during recent talks that some parents receiving the credit “would waste monthly child tax credit payments on drugs instead of providing for their children.”

Most of Manchin’s public opposition to the bill dealt with the bill’s cost, its effect on deficits, and a need to concentrate on the pandemic and Omicron variant. The senator, however, has said in the past that he supported a work requirement for the child tax credit.