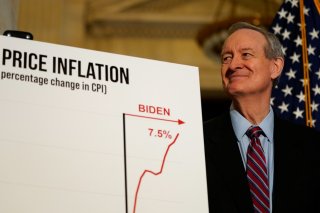 With inflation sitting at a more than four-decade high, Americans’ confidence level in the economy is fading fast, according to a new survey conducted by Gallup.

As reported by Fox Business, the poll published on Wednesday revealed that

42 percent of Americans rate the current economic conditions as “poor” and 38 percent say that they are “fair.” On the other hand, only 2 percent of respondents describe the economy as “excellent” and 18 percent say it is “good.”

In addition, 76 percent of Americans say that the economy is getting worse, 20 percent say it is improving, and 3 percent believe it will stay the same.

“However, if inflation continues to rise and gas prices remain elevated heading into the summer months, economic confidence in the U.S. may well fall further,” it continues.

Overall, 17 percent mentioned inflation as the most important problem facing the nation, while 12 percent said the economy in general, and 6 percent high fuel prices.

“As was the case last month, mentions of inflation are at their highest point since 1984,” the poll said.

Meanwhile, other recent studies and polls also have yielded results that show that Americans are struggling financially in this high-inflationary environment.

A survey released by Salary Finance has revealed that more than 75 percent of working Americans acknowledge that elevated inflation has negatively impacted their finances over the past year. In fact, about 20 percent of respondents admitted that they regularly run out of money between paychecks—a figure that has climbed from 15 percent last year.

Furthermore, an analysis conducted by Moody’s Analytics indicates that the current high-inflationary backdrop is costing the average American household an additional $327 per month. That dollar figure is roughly $30 more than last month’s estimate of $296 per month. A separate analysis released by Bloomberg economists suggests that high inflation will cost the typical American household an extra $5,200 this year, which comes out to $433 in extra monthly costs.

There is also increasing anxiety that the worst has yet to come. According to Bankrate’s First-Quarter Economic Indicator poll, more than half of experts—or 53 percent—believe that inflation will likely rise higher than expected over the next twelve to eighteen months.