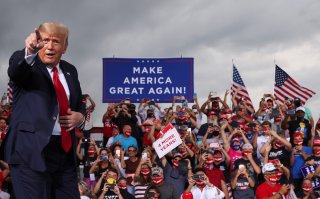 For Republicans such as Senate Majority leader Mitch McConnell, the chance to elevate Amy Coney Barrett to the Supreme Court likely matters more than reelecting Donald Trump to the presidency. Polls may indicate that a slight majority of the country favors waiting to fill former Justice Ruth Ginsburg’s seat, but McConnell is seizing the chance to put a conservative impress upon the court. Barrett offers an opportunity to reshape the court for decades, both on social and economic issues, by establishing a 6-3 conservative majority.

But even if Barrett herself is McConnell’s key mission, her hearings this week are more about the presidential race than her candidacy. Republicans are hoping that Democrats will mess up during the hearings and help reverse the GOP’s sagging standing in the polls. How likely are the hearings to do that?

The Democrats are unlikely to wade into the arena of Barrett’s Catholic faith. Sen. Dianne Feinstein, the lead Democrat on the Judiciary Committee, went down that road in 2017 and ended up in what amounted to a confirmation fender-bender. “And I think in your case, professor when you read your speeches,” Feinstein said, “the conclusion one draws is that the dogma lives loudly within you, and that’s of concern when you come to big issues that large numbers of people have fought for years in this country.” It was Feinstein who ended up accused of being dogmatic about religious beliefs. A repetition is improbable. Sen. Chris Coons said last week, “I don’t intend to question her about her personal views or private religious faith or views. I don’t expect my colleagues will either.”

Instead, leading Democrats are vowing to seek what they believe will be more fertile territory in the form of Barrett’s stands on abortion and Obamacare. It’s no accident that vice-presidential nominee and Sen. Kamala Harris will be attending the hearing. A tough questioner, she will focus on the politics of Barrett’s judicial record. So will other Democrats. Feinstein focused on the Affordable Care Act, citing Trump’s remark, that his nominations, unlike Chief Justice John Roberts, would overturn it. “Republicans want Judge Barrett,” she said, “an outspoken critic of the law, on the court so she can overturn the ACA.” Sen. Dick Durbin sounded a note of moral indignation: “You have been nominated by a president who shows contempt for the Constitution, but does not hesitate to tell his loyal followers that you are being sent to the bench to do his political chores: Abolish the ACA, rule in his favor on any election contest, and even more. You cannot feel good about a president cheapening this historic moment.”

At the same time, Sen. Lindsey Graham, who's standing in the polls in South Carolina has gone wobbly, will be looking to firm up his conservative bona fides on national television. “This is probably not about persuading each other,” Graham said. “Unless something really dramatic happens, all Republicans will vote yes and all Democrats will vote no.”Thom Tillis, Joni Ernst and John Cornyn also serve on the committee and are taking a tough line in favor of Barrett. None of the fireworks are likely to perturb Barrett, an accomplished and practiced speaker. She will say as little as possible during the confirmation hearing.

The hearing will serve as a form of war by other means, at least for a week, as Republicans and Democrats blast each other. Ever since the abortive nomination of Robert Bork in 1987, confirmation hearings have taken on an increasingly vituperative cast. Barrett is merely a proxy for the latest Washington culture war over the 2020 election. Her nomination has injected an extra dose of rocket fuel into an already scorching political race.

Does any of it have much to do with governing the country? Fuggedaboutit.