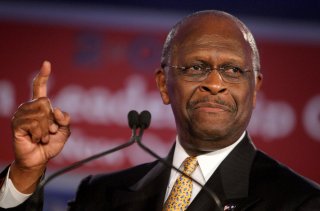 “Herman Cain — our boss, our friend, like a father to so many of us — has passed away,” Cain’s website editor, Dan Calabrese, wrote on the website announcing his death.

“We knew when he was first hospitalized with COVID-19 that this was going to be a rough fight,” Calabrese said. “He had trouble breathing and was taken to the hospital by ambulance. We all prayed that the initial meds they gave him would get his breathing back to normal, but it became clear pretty quickly that he was in for a battle.”

Cain was diagnosed and admitted to an Atlanta-based hospital earlier in July—less than two weeks after attending President Donald Trump’s campaign rally in Tulsa, Oklahoma—where he was seen without a mask. He’s been known to be vocal regarding his opposition to wearing a mask, especially for Trump’s event at Mount Rushmore. Although it’s unknown where Cain contracted the virus due to his heavy travel schedule, a number of Trump’s campaign staffers and Secret Service agents self-isolated after the Tulsa rally due to fear of exposure.

Cain’s staff noted that he was undergoing oxygen treatment during his time at the hospital.

Cain served as the former CEO of Godfather’s Pizza and entered politics in 1996 where he served as senior advisor for Bob Dole’s presidential campaign. He also was active in public policy, where he was the former chairman of the Federal Reserve Bank in Kansas City, Missouri.

During his presidential run in 2012, Cain grew notorious for his “9-9-9: tax reform plan” that called to replace current taxes with a 9 percent personal income tax, a 9 percent business transactions tax and a 9 percent federal sales tax. Cain took a slight lead over Mitt Romney, but quickly tanked in the polls after he was accused of sexual harassment and misconduct. He decided to drop out of the race following these allegations and denied all claims.

Cain—who was set to launch a show at Newsmax TV—was diagnosed with stage four colon cancer in 2006 but survived after undergoing chemotherapy.

“Although he was basically pretty healthy in recent years, he was still in a high-risk group because of his history with cancer,” Calabrese said.

Ellen Carmichael, a former member of Cain’s staff, tweeted Thursday, “I’m very saddened to learn of the passing of my former boss, Herman Cain. I’m bracing for the cruelty online about how he deserved to get COVID and die because of his politics. We’re living in a dark time. But, they didn’t know him. I did.”

Cain was an avid Trump supporter and served as co-chair of Black Voices for Trump. The president wanted to nominate him for the Federal Reserve Board, but Cain dropped out after receiving backlash from Republican lawmakers.

White House press secretary Kayleigh McEnany also took to Twitter Thursday, saying that Cain “embodied the American Dream and represented the very best of the American spirit. Our hearts grieve for his loved ones, and they will remain in our prayers at this time. We will never forget his legacy of grace, patriotism, and faith.”