AOC Gets Into Bitter Exchange with GOP Congressman on Capitol Steps 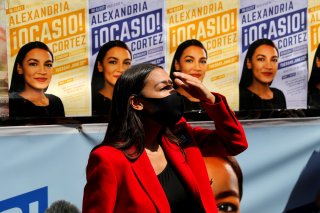 Rep. Alexandria Ocasio-Cortez (D-N.Y.) and a Republican lawmaker from Florida had a brief but bitter exchange on the east side of the Capitol steps Monday - on issues relating to violent crime and policing.

After casting a vote, Rep. Ted Yoho closed in on Ocasio-Cortez as she was walking up the steps and said, “You are out of your freaking mind,” referring to the congresswoman's recent remarks about surges in crime in New York City during the last few months.

Ocasio-Cortez quickly responded by saying he was “rude,” according to The Hill.

The two split as Yoho marched towards House buildings and Ocasio-Cortez strolled into the Capitol building, but Yoho had more to say.

“Fucking bitch,” he said, not speaking to anyone specifically.

At a virtual town hall event in early July, Ocasio-Cortez, who serves areas in Queens and the Bronx, attributed the jumps in gun violence in New York to spikes in unemployment and the economic crisis triggered by the coronavirus pandemic. She said that New Yorkers who are financially struggling may be “put in a position” where they feel they have to steal food in order to make ends meet.

“That kind of confrontation hasn’t ever happened to me - ever,” Ocasio-Cortez said, referring to the exchange with her colleague. “I’ve never had that kind of abrupt, disgusting kind of disrespect levied at me”

Yoho declined to comment on the matter hours later.

Ocasio-Cortez has been known to support reducing police funds and shifting the money towards social services and mental health.

“Crime is a problem of a diseased society, which neglects its marginalized people. Policing is not the solution to crime,” she said at the virtual event.

"Maybe this has to do with the fact that people aren't paying their rent and are scared to pay their rent, and so they go out and they need to feed their child and they don't have money," she said. "So ... they're put in a position where they feel like they either need to shoplift some bread or go hungry that night."

Republicans lashed out at Ocasio-Cortez after hearing her comments.

“There’s a big difference between shoplifting and cold-blooded murder, and for her not to know the difference is frankly astonishing,” said former Arkansas Republican Gov. Mike Huckabee on Fox News.