AOC will Introduce Bill that Requires Federal Agents to Identify Themselves 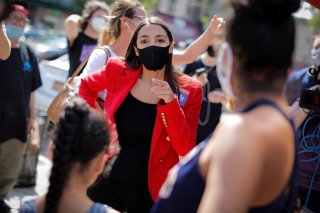 The bill forces all on-duty federal agents to provide the name of the agency, their own last name and their identification number, according to a draft bill obtained by The Nation.

The legislation also amends oversight for the Justice Department, requiring the inspector general to lead frequent audits to ensure all rules are being followed.

“Federal law enforcement officers should have their identifying information displayed while on duty,” Ocasio-Cortez tweeted. “This is basic.”

The push comes after the Department of Homeland Security’s (DHS) federal agents arrested protesters in Portland, Ore. while driving unmarked vehicles. Despite the mayor of Portland’s orders to remove the federal agents from the city, acting Homeland Security Secretary Chad Wolf persisted and told Fox News, “That’s just not going to happen on my watch.”

“I offered DHS support to help them locally address the situation that’s going on in Portland, and their only response was: please pack up and go home,” he said.

But, Ocasio-Cortez’s staff noted that the bill had been drafted prior to the incident in Portland.

“Lots of lawyers are asking the same thing: Where’s the transparency? Unidentified internal security forces are apprehending American citizens, and accounts allege these apprehension processes are more similar to overseas renditions than traditional arrests. Citizens deserve to know who’s arresting them—or at least what entity—to report any abuses they suffer or witness,” Irvin McCullough, deputy director of legislation at the Government Accountability Project, said after seeing the drafted bill.