Are Social Security Recipients Being Cheated Out of Nearly $5,000? 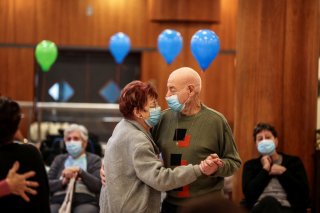 When it comes to the Social Security program, the news is almost invariably on the negative side.

But just last fall, millions of American seniors got a rare piece of good news when the Social Security Administration confirmed that there would be a 5.9 percent cost of living adjustment (COLA) in 2022.

This sizeable increase—the biggest bump seen in four decades—will raise average Social Security monthly payments by about $90. The estimated average payment will now be $1,657, and a typical couple’s benefits will climb to roughly $2,754 per month, a $150 increase.

However, there are already fears brewing that despite the massive COLA raise in 2022, retired workers will keep losing out due to the decline of purchasing power in today's red-hot high inflationary environment.

“To put it in perspective, for every $100 worth of groceries a retiree could afford in 2000, they can only buy $68 worth today,” Mary Johnson, the Social Security policy analyst for The Senior Citizens League (TSCL), said in a statement.

And according to The Motley Fool, it’s not just groceries that seniors should be worried about. They could be cheated out of nearly five grand in total.

“The aggregate increase in COLA since the turn of the century (and prior to the 5.9 percent COLA announcement) amounted to 55 percent. This means the average Social Security benefit has grown from $816 a month to about $1,262 a month in 2021,” the financial site writes.

“However, the typical expenses seniors have faced over this same twenty-one-year period have risen by a considerably faster 104.8 percent. In order for Social Security benefits to have kept pace with inflation, retired workers should have been receiving $1,671 a month in 2021, or about $409 more per month, according to TSCL,” the report continues.

“When extrapolated over a year, we’re talking about a shortfall of approximately $4,900 for the average Social Security beneficiary,” it concludes.

In light of these issues, TSCL has already taken the initiative to make seniors’ hardships known to Washington lawmakers. The group has been campaigning via a popular petition that urges Congress to quickly approve a fourth round of $1,400 stimulus checks for recipients of the Social Security program.

“Social Security benefits are one of the few types of income in retirement adjusted for inflation. But soaring inflation has taken a toll on household finances of retired and disabled Social Security recipients,” the petition reads.