Is Bacon RIP in California? 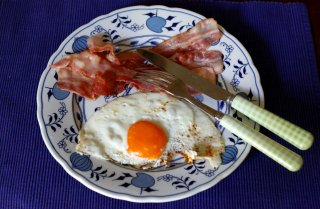 Back in 2018, California passed a ballot initiative called Proposition 12, or the Farm Animal Confinement Initiative.

The initiative, which passed with 62.66 percent of the vote, required that farms in that state “establish minimum space requirements based on square feet for calves raised for veal, breeding pigs, and egg-laying hens,” and “ban the sale of (a) veal from calves, (b) pork from breeding pigs, and (c) eggs from hens when the animals are confined to areas below minimum square-feet requirements.”

But now, with the new rules about to go into effect, it may soon get much more difficult to find certain food, including bacon, in the state of California. And it could cause pork prices to rise, even outside of California.

Enforcement will soon begin for those new rules, according to the Associated Press.

“Unless the courts intervene or the state temporarily allows non-compliant meat to be sold in the state, California will lose almost all of its pork supply, much of which comes from Iowa, and pork producers will face higher costs to regain a key market,” the Associated Press said.

“We are very concerned about the potential supply impacts and therefore cost increases,” Matt Sutton, the public policy director for the California Restaurant Association, told the Associated Press. In addition, California has not yet released official regulations in terms of how the new rules will work.

While the National Pork Producers Council has asked the government to help with the cost of retrofitting hog facilities to bring them into compliance with the California law, hog farmers say they haven’t yet adjusted their facilities. The pork industry has also filed lawsuits to stop the new rules and tried asking Gov. Gavin Newsom to delay them, but such efforts have been unsuccessful so far.

“It is important to note that the law itself cannot be changed by regulations and the law has been in place since the Farm Animal Confinement Proposition (Prop 12) passed by a wide margin in 2018,” the California Department of Food and Agriculture told the Associated Press.

“Why are pork producers constantly trying to overturn laws relating to cruelty to animals?” Josh Balk of the Humane Society of the United States, said in the article. “It says something about the pork industry when it seems its business operandi is to lose at the ballot when they try to defend the practices and then when animal cruelty laws are passed, to try to overturn them.”

Also in 2018, a Marine Corps Chief Warrant Officer used his AR-15 suppressor to fry bacon, calling it “about as ‘America’ as you can get.”