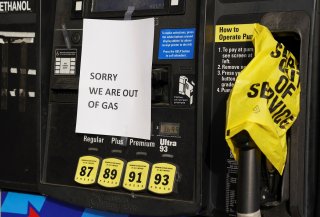 The onset of spring, the easing of the pandemic, and the Colonial Pipeline disruption in the Southeast have combined to bring the average price of gas in the United States to over $3 for the first time in seven years.

According to GasBuddy, the average price has hit that milestone for the first time since 2014. And there’s a big reason why, which has little to do with politics or any other controversial subject.

“While many Americans are pointing fingers, they should be pointing at the same factor GasBuddy mentioned months ago: COVID-19 related recovery is pushing things back to normal and leading to rising gasoline demand,” GasBuddy said.

Indeed, gas prices reached historic lows in the spring of 2020, with state-at-home orders in place in the early months of the pandemic bringing demand to extremely low levels. Since then, those conditions have subsided.

“While this is not a milestone anyone wants to celebrate, it’s a sign that things are slowly returning to normal,” Patrick De Haan, head of petroleum analysis at GasBuddy, said in a blog post.

“In this case, rising gas prices are a sign Americans are getting back out into the world — attending baseball games, going to concerts, taking a road trip — basically staying anywhere but at home. This summer may see some blockbuster demand for fuel as well, as Americans find it very challenging to travel internationally, leading many to stay in the confines of U.S. borders, boosting some weeks to potentially record gasoline demand.”

De Haan, however, went on to predict that gas prices this summer are unlikely to break records.

“They will settle down to levels more similar to 2018: the national average briefly rising above $3/gallon but eventually falling back under and remaining in the upper $2 to low $3 per gallon range,” he wrote. “Should any major refinery issues develop in the midst of the summer travel season, gas prices could become impacted in a large way, especially if the economy continues to see solid recovery and demand for fuels increases.”

Meanwhile, following the news of the pipeline attack and subsequent disruption, the Twitter account of the U.S. Consumer Products Safety Commission has had to issue an unusual warning.

“Do not fill plastic bags with gasoline,” the series of tweets said. “Use only containers approved for fuel… Follow the gas canister manufacturer instructions for storing and transporting gasoline.”