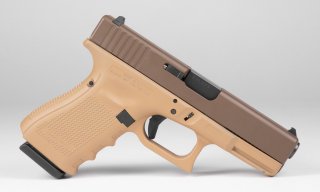 Across the country, there has been a similar story told: as soon as stimulus checks came in gun sales increased. A number of factors could be playing a role. In addition to fears including increased violence in the country, and concerns over new gun control measures, many Americans just had extra money to spend.

A key factor is that many consumer products from kitchen appliances to furniture and even automobiles have been in short supply. Those trying to buy a new refrigerator or stove have found items on backorder for weeks or possibly months.

Likewise, building materials have nearly doubled in price since last year, while computer chips are in short supply – and as a result, many people are putting off major home improvements and waiting to buy a new TV or computer. Instead, they've been taking that extra money and buying the one category of products still widely available: firearms.

An increase in firearm sales, especially AR-15s, likely wasn't what President Joe Biden or other Democratic lawmakers had in mind when the American Rescue Plan Act of 2021 was passed in March, but that is how a lot of the recent money was spent.

The money from the government was meant to be a lifeline to those impacted by the novel coronavirus, and help individuals pay rent/mortgages or put food on the table. It was also meant to help stimulate the economy, which was hurt by the mandatory shutdowns that started just over a year ago.

Those who didn't need it still spent it, and a lot of it was spent on firearms. The Tennessee Bureau of Investigation (TBI) reported that it had more requests for firearm background checks all three times people were receiving their stimulus payments. WRCB TV in Chattanooga reported the TBI received requests for about 28,000 thousand firearm background checks in about a two-week period before the $1.9 trillion stimulus relief package was passed earlier this month. The next two weeks they received nearly 39,000 requests.

Gun shops around the country reported a notable uptick in sales after each round of stimulus checks went out.

"Stimulus check equals gun money," Brandon Wexler, owner of Wex Gunworks in Delray Beach, Florida told Forbes in March just before the passage of the American Rescue Plan Act of 2021, which authorized the most recent stimulus payments. "I do anticipate that when people get a stimulus check they will spend it on firearms, accessories, high-capacity magazines and ammo, if they can get it."

Another gun shop owner who spoke with Forbes, Al Tawil, owner of Towers Armory in Oregon, Ohio, said his weekly sales jumped by about twenty percent mid-April 2020, when many Americans received the first $1,200 stimulus payments from the federal government.

Small Arms Analytics & Forecasting, an analyst firm that tracks firearm sales at the retail level, reported that sales are set to break the yearly record of 22.8 million in 2021.

Joe Biden is already being called the best gun salesman the industry could want, and it seems Uncle Sam has been happy to pay for the guns as well.