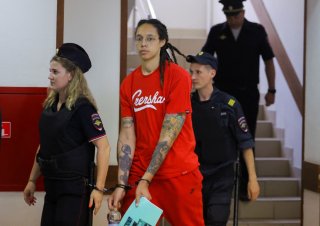 On Thursday women’s basketball star Brittney Griner pleaded guilty to drug charges on the second day of her closely watched trial in a Russian court near Moscow, where she faces up to ten years in prison.

“I'd like to plead guilty, your honor. But there was no intent. I didn't want to break the law,” Griner told the court, adding that she would give her testimony at a later date.

The thirty-one-year-old athlete was detained at Sheremetyevo International Airport on February 17 after the Russian Federal Customs Service claimed to have found vape cartridges containing hashish oil, a marijuana concentrate, in her luggage.

CNN reported that Griner's lawyers expect the Russian court to take into account her guilty plea and hope for leniency. “She decided to take full responsibility for her actions as she knows that she is a role model for many people,” the lawyers’ statement read.

“Considering the nature of her case, the insignificant amount of the substance and [Brittney Griner] BG's personality and history of positive contributions to global and Russian sport, the defense hopes that the plea will be considered by the court as a mitigating factor and there will be no severe sentence,” it continued.

Boykov added that samples taken from Griner did not show any traces of illegal drugs. “She was clean, and she was tested,” he said.

During Thursday’s hearing, a senior U.S. diplomat gave Griner a letter that President Joe Biden wrote in reply to her July 4 letter in which she pleaded for her release. On Wednesday, Biden also spoke to Brittney’s wife Cherelle Griner by phone.

“The president called Cherelle to reassure her that he is working to secure Brittney’s release as soon as possible,” the White House said in a statement, which also singled out Biden’s efforts to bring home Paul Whelan and other U.S. nationals who are “wrongfully detained or held hostage” in Russia.

According to Fox News, Hugh Dugan, a longtime diplomat who served as the special presidential envoy for hostage affairs during the Trump administration, noted that Griner’s guilty plea could further complicate her release. “This brings her closer to being identified as a sentenced convict with less than 1 percent chance of acquittal,” he said.

“There would be more wiggle room if she hadn't gotten to this point, I think, and let the system drag it out and not classify her as such. But this, in my mind, can make her a more valuable resource for Russia, because now they can say we have a legitimate criminal under their law, and we have to be true to our system, etc.,” he continued.