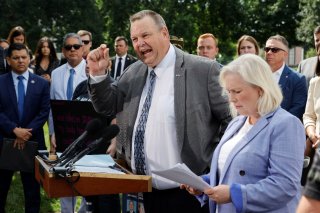 Veterans vented their anger on Thursday after Senate Republicans stymied a bipartisan measure that would have expanded health care benefits for an estimated 3.5 million U.S. veterans exposed to toxic burn pits during wars in Afghanistan and Iraq, CBS News has reported.

The legislation also aimed to remove the burden of proof from veterans and their families by presuming many conditions could be related to exposure to toxic fumes from burn pits.

Known as the Honoring Our PACT Act, the bill passed both the House and the Senate with bipartisan support last month, but due to a snag in the bill’s language, it needed to pass the House and Senate again.

NBC News reported that on Wednesday night, forty-one Senate Republicans blocked the legislation’s passage, including twenty-five who had backed it just a month ago.

“We really expected yesterday to be a procedural vote that would go with easy passage,” Jeremy Butler, CEO of Iraq and Afghanistan Veterans of America, a nonprofit veterans’ organization, told the news outlet. “That was the absolute expectation.”

During a press conference Thursday, Sen. Jon Tester (D-MT) noted that he has “never seen anything that's happened like what happened yesterday and what compounds it and makes it that much more difficult is we in essence yesterday took benefits away from the people who have been impacted by war—that we sent off to war.”

Like the sentiments expressed by many veterans, Butler said he believes the move was political.

“We’ve seen partisanship and games within Congress for years. But what is shocking is that so many senators would literally be willing to play with veterans’ lives so openly like this,” he said.

“They’re manufacturing reasons to vote against legislation that they literally voted for just last month. And so it’s really a new level of low,” he continued.

Meanwhile, former Daily Show host Jon Stewart described the lawmakers’ opposition to the bill as “an embarrassment to the Senate, to the country, to the founders, and all that they profess to hold dear.”

Open-air burn pits were common at U.S. military bases during the wars in Iraq and Afghanistan. Dangerous materials were regularly doused in jet fuel and set on fire, spewing toxic fumes into the air. Veteran groups say many individuals have developed cancers, respiratory illnesses, and other severe health conditions.