Biden’s Bipartisan Infrastructure Compromise is Back On (For Now) 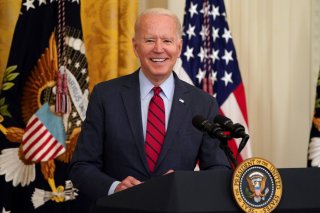 On Saturday, President Joe Biden endorsed “without hesitation” a bipartisan compromise on his infrastructure bill, seeming to back away from an earlier threat to veto it.

The president clarified his earlier remarks, suggesting that he had not meant to imply that he would veto the $1.2 trillion infrastructure bill if Congress refused to pass a broader investment package, worth approximately $3 trillion more. Biden’s off-the-cuff comment—“If this is the only thing that comes to me, I’m not signing it”—had caused consternation in Washington, angering several of the Republicans who had worked on the measure with their Democratic colleagues.

“My comments […] created the impression that I was issuing a veto threat on the very plan I had just agreed to, which was certainly not my intent,” Biden clarified in a statement on Saturday.

The bipartisan compromise, agreed to by five Senate Republicans and five Senate Democrats on Thursday, was hailed as a victory for the moderate wings of each party, and a vindication of the president’s emphasis on working across the aisle on issues of mutual benefit.

Infrastructure has long been a bipartisan concern. On the 2016 campaign trail, both then-candidate Donald Trump and his opponent Hillary Clinton promised multibillion-dollar infrastructure investments, although no major infrastructure bill was passed during the Trump administration due to disagreement on its specific provisions.

The first major bill of the Biden administration, the $2 trillion American Rescue Plan Act, included $366 billion in infrastructure spending. Biden followed this up with two proposed bills, the American Jobs Plan and American Families Plan, which included further spending. However, Republicans on Capitol Hill balked at the combined cost of $4 trillion for these two measures, and opposed them in their original form, while offering to negotiate the cost down.

In his statement, Biden clarified that he would not condition the advance of the compromise bill on the advance of the other two, choosing instead to separate them. He acknowledged that their disagreements would continue: “To be clear, our bipartisan agreement does not preclude Republicans from attempting to defeat my Families Plan; likewise, they should have no objections to my devoted efforts to pass that Families Plan and other proposals in tandem.”

Even the bipartisan compromise bill, however, is not out of the woods yet. The bill was agreed to by the five most moderate Republicans in the Senate, but five more are needed in order to overcome the threat of a filibuster—a point of continued difficulty between the two wings of the Senate.