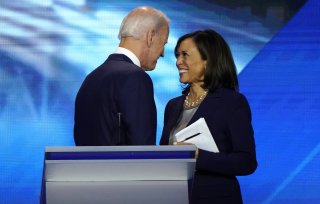 “I have the great honor to announce that I’ve picked @KamalaHarris — a fearless fighter for the little guy, and one of the country’s finest public servants — as my running mate,” Biden tweeted.

“Back when Kamala was Attorney General, she worked closely with Beau,” he added. “I watched as they took on the big banks, lifted up working people, and protected women and kids from abuse. I was proud then, and I’m proud now to have her as my partner in this campaign.”

Harris, 55, is the first black woman in U.S. history to run on a major party’s ticket.

“I need someone working alongside me who is smart, tough, and ready to lead. Kamala is that person,” Biden said in an email to supporters when he announced his vice presidential pick.

On Biden’s long list of contenders for the final spot, Harris was always considered at the top due to her experience on Capitol Hill, as the California attorney general and as the former district attorney of San Francisco. Although other candidates on the list could have been a strong fit including Sen. Elizabeth Warren (D-Mass.), Susan Rice, Michigan Gov. Gretchen Whitmer and Rep. Karen Bass (D-Calif.), no other candidate was as nationally recognized and supported widespread by the entire party.

“I am extraordinarily proud to support @KamalaHarris and @JoeBiden! They will be a fierce team to Build America Back Better,” Whitmer tweeted.

“I am thrilled to support Senator Kamala Harris as the next Vice President of the United States. I am privileged to have been part of this process and to speak with Vice President Biden at length over the weekend and again today. He is building a team that can rebuild America and restore our faith in what lies ahead,” Stacy Abrams, former top Democrat in the Georgia House, tweeted.

Harris is known to focus on issues relating to criminal justice reform, healthcare for Black Americans, and ending racial injustice tensions across the country.

Former Sen. Chris Dodd of Connecticut, who served as a member of Biden’s vice president selection committee, however, has condemned Kamala in the past, after she verbally attacked Biden during an early primary debate, claiming she had “no remorse.” Other Democrats question Harris’s ambitions for her candidacy, speculating that if Biden is elected, the next four years will just be a campaign race to run for president in 2024.

Biden and Harris are slated to deliver remarks for the first time together in Delaware on Wednesday, according to his campaign team.