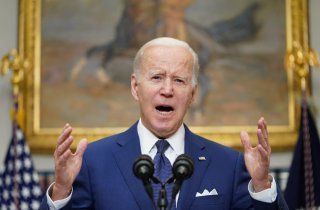 “We as a nation have to ask when in God’s name are we going to stand up to the gun lobby. When in God’s name do we do what we all know in our gut needs to be done?” asked Biden, who learned of the shooting at Robb Elementary School while returning from his trip to Asia on Air Force One.

The president continued his address to the nation: “These kinds of mass shootings never happen with the kind of frequency they happen in America. Why? Why are we willing to live with this carnage? Why do we keep letting this happen? … It’s time to turn this pain into action.”

“As a nation, we have to have the courage to take action and understand the nexus between what makes for reasonable and sensible public policy to ensure something like this never happens again,” she continued.

The Uvalde massacre is the second mass shooting to rattle the country in just ten days; an attack at a grocery store in Buffalo, New York, killed ten on May 14.

Per the Associated Press, soon after arriving in Buffalo, Biden was asked about the prospect of new gun restrictions that have routinely been blocked by Republicans. The president told reporters that “it’s going to be very difficult. … I’m not going to give up trying.”

Biden was also asked if there were any executive orders he could issue to address rising gun violence.

“Not much on executive action. I’ve got to convince the Congress that we should go back to what I passed years ago,” he said, referring to the 1994 ​​Federal Assault Weapons Ban. “We have enough laws on the books to deal with what’s going on now. We just have to deal with it. Look, part of what the country has to do is look in the mirror and face the reality. We have a problem with domestic terror. It’s real.”

In a speech on the Senate floor on Tuesday, Sen. Chris Murphy (D-CT) urged his colleagues to take meaningful action to tackle gun violence.

“Why do you spend all this time running for the United States Senate, why do you go through all the hassle of getting this job, of putting yourself in [a] position of authority if your answer as the slaughter increases, as our kids run for their lives, we do nothing?” asked Murphy, who in 2012 represented the district where a gunman killed twenty-six people at Sandy Hook Elementary.

“What are we doing? Why are you here if not to solve a problem as existential as this? I’m here on this floor to beg, to literally get down on my hands and knees and beg my colleagues. Find a path forward here. Work with us to find a way to pass laws that make this less likely,” he concluded.