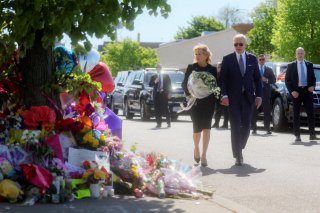 President Joe Biden on Tuesday condemned the “poison” of white supremacy in the United States, calling the shooting rampage that killed ten people at a grocery store in Buffalo, NY, over the weekend “domestic terrorism.”

Speaking to victims’ families, local officials, and first responders in Buffalo, Biden also warned that the nation must not be influenced by a “hateful minority.”

“White supremacy is a poison, it's a poison … running through our body politic,” Biden said.

“It's been allowed to grow and fester right before our eyes. No more, no more. We need to say as clearly and as forcefully as we can that the ideology of white supremacy has no place in America. None,” he added.

“In America, evil will not win, I promise you. Hate will not prevail. White supremacy will not have the last word. The evil did come to Buffalo and it's come to all too many places, manifested in gunmen who massacred innocent people in the name of hateful and perverse ideology, rooted in fear and racism. It's taken so much,” he continued.

Upon arrival in Buffalo, Biden was greeted by New York governor Kathy Hochul, Buffalo mayor Byron Brown, and local police and fire officials. Per WHAM in Rochester, NY, Hochul later pointed to the gun used in the attack, which was obtained legally by the suspect before being illegally modified with parts from Pennsylvania.

“That’s why we need a national gun policy that is common sense like we have here in New York,” she said. “We need this everywhere. And we'll all remember that it started here in Buffalo, New York.”

Per the Associated Press, Biden was asked about the prospect of gun control legislation, which has routinely been blocked by Republicans in the past. In response, the president told reporters that “it’s going to be very difficult. … I’m not going to give up trying.”

Biden was also asked if there were any executive orders he could issue to address rising gun violence.

“Not much on executive action. I’ve got to convince the Congress that we should go back to what I passed years ago,” he said.

“We have enough laws on the books to deal with what’s going on now. We just have to deal with it. Look, part of what the country has to do is look in the mirror and face the reality. We have a problem with domestic terror. It’s real,” he added.

The need for more robust regulations on guns was echoed by Rep. Brian Higgins (D-NY).

“We need laws that criminalize domestic terrorism,” he said.