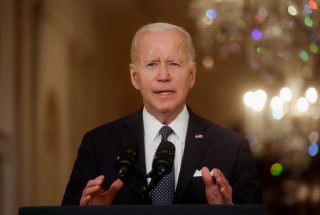 In an address to the nation Thursday night, President Joe Biden pleaded with Congress to quickly pass what he described as “rational, common-sense measures” to curb fast-rising gun violence in the country.

“How much carnage are we willing to accept? How many more innocent American lives must be taken before we say enough? Enough,” Biden said.

The president later pushed for a broad-based ban on assault weapons or an increase to the minimum legal age to purchase one from eighteen to twenty-one.

"If we can't ban assault weapons then we should raise the age to purchase them from eighteen to twenty-one,” he said.

“Why in God’s name should an ordinary citizen be able to purchase an assault weapon that holds thirty-round magazines, that lets mass shooters fire hundreds of bullets in a matter of minutes?” Biden asked.

“After Columbine, after Sandy Hook, after Charleston, after Orlando, after Las Vegas, after Parkland, nothing has been done,” the president said. “This time that can't be true. This time, we must actually do something.”

Per CBS News, House Speaker Nancy Pelosi told her Democratic colleagues in a letter Thursday that the House will hold a hearing next week on renewing the assault weapons ban, which expired in 2004. Meanwhile, a bipartisan group of senators—including Sen. Lindsey Graham (R-SC) and Sen. Richard Blumenthal (D-CT)—has been meeting to discuss common ground on gun legislation.

“This time, we have to take the time to do something, and this time, it's time for the Senate to do something,” Biden said. “My God, the fact that a majority of the Senate Republicans don't want any of these proposals even to be debated or come up for a vote I find unconscionable. We can't fail the American people again.”

As reported by Newsweek, at least two Republicans—Reps. Chris Jacobs (R-NY) and Adam Kinzinger (R-IL)—have come out in support of banning assault rifles.

“Look, I have opposed a ban, you know, fairly recently. I think I'm open to a ban now. It's going to depend on what it looks like because there's a lot of nuances on what constitutes, you know, certain things,” Kinzinger told CNN on Sunday.

“We have to be coming to the table with ways to mitigate eighteen-year-olds buying these guns and walking into schools—my side's not doing that. My side is not coming forward with reasonable ways to defend an amendment that we think is very important,” he continued.

During a recent news conference, Jacobs confirmed that “if an assault weapons ban bill came to the floor that would ban something like an AR-15, I would vote for it.”