Biden Puts Social Security Front and Center for the Midterms 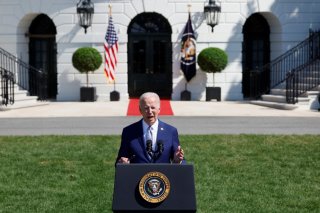 In an indication that Social Security will be a more significant part of the fall midterm election campaign than previously thought, President Biden referenced the program in a video this week, as reported by Fox News.

The sixty-six-second video was recorded on the anniversary of the signing of the Social Security Act.

"Look, if you know me, you know I think rebuilding the middle class is the moral obligation of our time," Biden said in the video, according to the report. "Social Security allows for our seniors to retire with dignity, and me and my Democratic friends on the Hill are trying to protect it and expand it.”

Biden then argued that Republicans wanted to take action to jeopardize the program.

"But here’s what’s crazy," Biden said in the video. "Republicans on the hill—they want to put it on the chopping block, every five years it’ll come up for reconsideration, whether it continues or not.”

Then Biden made a direct election-year pitch.

“Here’s the deal: Democrats in Congress, you get stronger Social Security and you deserve it. With Republicans in Congress, it’s probably going to get sliced.”

Biden was likely referencing the "12 Point Plan to Rescue America,” a messaging document released earlier this year by Sen. Rick Scott (R-FL), the Republican Senatorial Campaign Committee chairman. The Scott plan does not specifically call for the sunsetting of Social Security but states that “all federal legislation sunsets in 5 years. If a law is worth keeping, Congress can pass it again.”

Sen. Mitch McConnell (R-KY), the Senate Minority Leader, has denounced Scott’s plan and it has not been a big part of Republican messaging in the election cycle.

However, one senator who is running for re-election this year, Sen. Ron Johnson (R-WI), called in a recent interview for Social Security and Medicare to be treated as discretionary spending rather than funded by a trust fund like it is currently.

“I’ve been saying for as long as I’ve been here that we should transfer everything, put everything on budget so we have to consider it if every year. I’ve said that consistently, it’s nothing new,” Johnson recently said, per The Hill. “I want to save it, I want to fix it. Right now we’re whistling past the graveyard.”

As for Biden's comments, while he said that “my Democratic friends on the Hill are trying to protect [Social Security] and expand it,” he did not endorse any specific proposals before Congress to expand or reform the program. There is Social Security 2100: A Sacred Trust, a plan endorsed by Rep. John Larson (D-CT), which would increase benefits and extend the program’s solvency further into the future.

The Social Security Expansion Act, backed by a group of progressive lawmakers led by Sen. Bernie Sanders (I-VT), would not only increase benefits even more significantly but would keep the program solvent even further into the future.

“Yes, we can live in a country where every senior lives in dignity and security, and does not have to choose between paying for basic necessities like medicine, food, or housing,” Sanders explains the new bill. “We will do this by guaranteeing every American the right to a secure retirement, the opportunity to age in place in the community, and by expanding and improving Medicare to include dental, hearing, and vision care.”

Some other proposed bills would make more modest reforms.

The president has not endorsed any of the specific bills. But, with the Inflation Reduction Act already passed and no major legislation on the docket for the fall session of Congress, perhaps the Democrats could see Social Security reform as a winning political issue heading into November.

Last week, Andrew Biggs, the president’s nominee for the Social Security Advisory Board, commented on how to solve the program’s money issues in a new interview with CNBC.

“The existing plans to expand Social Security significantly rely on raising taxes on Americans earning less than $400,000, which is contrary to the President’s position. So if the president has said he doesn’t favor that approach, that pushes towards a more compromised position, which is what I would favor,” he said.

“The political reality is that on really any big legislation, but in particular entitlement reform like Social Security, it’s impossible for one political party to pass its own plans without any support from the other side,” he said. "Our system requires it to pass the House, then have a super-majority in the Senate, then get the president to sign on. It is very unusual for one political party to hold all those keys to power. So in the U.S., big reforms like the 1983 Social Security reforms tend to be bipartisan. I think that ultimately is how things are going to have to turn out.”