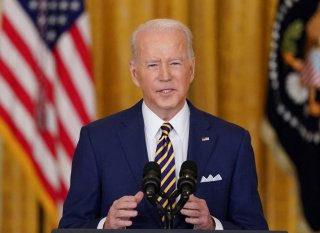 However, the White House’s Build Back Better plan, which would have extended the credit by a year, is currently stalled in the Senate. As a result, child tax credit checks were not distributed this January.

As Democrats in the White House and the Senate continue their efforts to move the Build Back Better agenda forward, Sen. Joe Manchin’s (D-WV) opposition to the legislation has been a major roadblock.

This week, per the Associated Press, President Biden himself called for the renewal of the expanded child tax credit.

Speaking while packing food for the hungry in Philadelphia on Martin Luther King Day, Biden discussed the issue. "The child tax credit was really helpful. We've got to get it renewed," Biden said.

Doing so, however, will likely be a tall order. The Hill reported that the Democrats are willing to compromise with Manchin in order to pass a less expansive version of the Build Back Better Act. According to one lawmaker, Manchin’s opposition has made them believe that passing a watered-down version of the House bill is preferable to passing nothing at all.

While he has expressed opposition to the current form of the bill, Senator Manchin supported several previous provisions within the bill and voted for the American Rescue Plan Act in March of 2021.

Democrats in vulnerable seats hope for a victory to show to their voters ahead of the upcoming midterm elections. Those challenging midterm elections have also led liberal lawmakers to see this year as their last opportunity to enact major domestic legislation.

Of course, any version of the bill that passes the Senate will have to again make it through the closely divided House.

One moderate House Democrat, Rep. Scott Peters (D-Calif.), told the Hill that the expanded child tax credit could survive, at least in some form, but will likely have to be scaled down.

“To me, if you want to help families, child tax credits make the most sense,” the Congressman said. “It provides resources in a targeted way and gives parents the ability to decide whether to stay home, send kids to preschool or invest in child care.”