Biden Weighs In on Taiwan Tensions 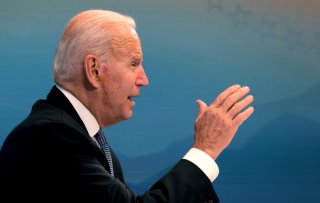 President Joe Biden indicated on Tuesday that he had an understanding with Chinese President Xi Jinping regarding the ongoing escalation of tensions near Taiwan.

The island off China’s coast, which Beijing has long claimed as a rebellious province but which functions as a de facto independent state, has seen increased Chinese provocations over the past week. On Monday, the Taiwanese Defense Ministry reported that fifty-six aircraft from the People’s Liberation Army Air Force (PLAAF) had entered its “air defense identification zone,” or ADIZ, in a show of force following China’s October 1 National Day.

When Biden was asked about “China’s provocation over Taiwan” during a press conference. He answered that he had “spoken with [President] Xi about Taiwan… We agree, we’ll abide by the Taiwan agreement, and we made it clear that I don’t think he should be doing anything other than abiding by the agreement.”

While it was initially unclear if Biden was referring to a new conversation or the phone call he held with the Chinese leader on September 10, the White House later confirmed that no new conversation had taken place.

On Wednesday, Taiwanese Defense Minister Chiu Kuo-cheng told the island’s parliament that Taiwan’s tensions with mainland China had risen to their highest levels in four decades. Chiu also warned that China would be able to mount a full-scale invasion of Taiwan within five years.

In an article published by Foreign Affairs, Taiwanese president Tsai Ing-wen defended the island’s political system, declaring that Taiwan was willing to “do whatever it takes to defend itself.”

The Chinese state-owned Global Times newspaper criticized Tsai’s remarks, accusing her of turning Taiwan’s democracy into an “extreme ideology” and showing fealty to the United States by urging Western assistance in an American magazine.

The United States has informally committed to defending Taiwan, although it has never made an explicit statement to that effect. In August, Biden claimed in an ABC interview that the United States would respond to action against Taiwan as it would against its NATO allies—which it is explicitly committed to defending by the NATO charter’s Article Five.

“Same with Japan, same with South Korea, same with Taiwan,” the president said—prompting the Biden administration to backpedal and deny an official policy change.

U.S. National Security Adviser Jake Sullivan is scheduled to meet with Central Foreign Affairs Commission Chairman Yang Jiechi in Switzerland on Wednesday, the first meeting of the two since an acrimonious two-day summit in Alaska in March.