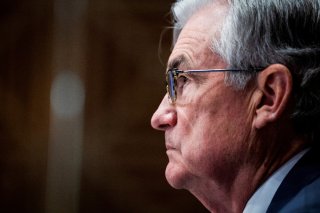 The Federal Reserve on Wednesday green-lighted a rare half-percentage-point interest rate hike and announced plans to shrink its $9 trillion asset portfolio beginning next month in an effort to blunt inflation that has surged to a forty-year high.

“Inflation is much too high and we understand the hardship it is causing. We’re moving expeditiously to bring it back down,” Fed chairman Jerome Powell stated in his news conference. “We have both the tools we need and the resolve that it will take to restore price stability on behalf of American families and businesses,” he continued.

The widely anticipated move of a fifty-basis point hike, the largest increase the rate-setting Federal Open Market Committee has instituted since May 2000, now puts the key benchmark federal funds rate at a range between 0.75 percent and 1 percent, the highest level since the Covid-19 pandemic started more than two years ago. Current market pricing has the rate rising to 2.75 percent to 3 percent by the end of the year, according to CME Group data.

The fed funds rate essentially controls the amount that banks charge each other for short-term borrowing but also serves as a guide for many forms of consumer-related debt.

Due to Powell’s comments, markets are now expecting that the central bank will continue raising rates aggressively in the coming months. The chairman confirmed that moves of fifty basis points “should be on the table at the next couple of meetings”—but he appeared to back off on the likelihood of the Fed getting more hawkish.

“Seventy-five basis points is not something the committee is actively considering,” Powell said. “The American economy is very strong and well-positioned to handle tighter monetary policy,” he added.

After Powell essentially rejected the possibility of a seventy-five-basis point hike, the stock market rallied with the S&P 500 registering its best day since May 2020.

The Fed now foresees a “soft or softish” landing for the U.S. economy despite the tighter monetary policy going forward. In contrast, according to Fox Business, Deutsche Bank, Goldman Sachs, and Bank of America are among the firms forecasting a recession within the next two years.

“With appropriate firming in the stance of monetary policy, the committee expects inflation to return to its 2 percent objective and the labor market to remain strong," the central bank said in its post-meeting statement.

Powell added that “nothing about it suggests it’s close to or vulnerable to a recession.”

Collin Martin, fixed income strategist at Charles Schwab, told CNBC that there were “no surprises on our end.”

“We’re a little bit less aggressive on our expectations than the markets are,” he said. “Do think another fifty-basis point increase in June seems likely. … We think inflation is close to peaking. If that shows some signs of peaking and declines later in the year, that gives the Fed a little leeway to slow down on such an aggressive pace.”