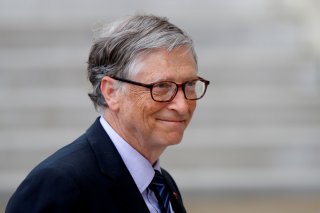 Billionaire philanthropist Bill Gates is sounding the alarm that the world will see another pandemic in the future.

“We’ll have another pandemic. It will be a different pathogen next time,” he told CNBC at Germany’s annual Munich Security Conference on Friday.

The good news, however, is that the danger of experiencing severe illness from Covid-19 has “dramatically reduced.”

“The chance of severe disease, which is mainly associated with being elderly and having obesity or diabetes, those risks are now dramatically reduced because of that infection exposure,” the Microsoft cofounder noted.

Gates, who has been warning about the threat of a global pandemic since 2015, advised that the world should move faster in the future to manufacture and distribute vaccines. To that end, governments need to make sizable investments right now.

“Next time we should try and make it, instead of two years, we should make it more like six months,” Gates said, adding that it was already “too late” to reach the World Health Organization’s goal to vaccinate 70 percent of the world’s population by mid-2022.

Currently, roughly 62 percent of the global population has received at least one dose of a Covid-19 vaccine.

“The cost of being ready for the next pandemic is not that large,” Gates added. “It’s not like climate change. If we’re rational, yes, the next time we’ll catch it early.”

Meanwhile, also touching on the trend that more people are experiencing less severe illness from Covid-19, Dr. Scott Gottlieb told CNBC that his children “won’t be wearing a mask” when their local school district’s mask mandate lifts later this month.

“If it becomes optional, I think most kids won’t. Some will, and we need to respect that. Some parents are going to continue to wear masks,” said the former chief of the Food and Drug Administration.

However, it is a different story when entering public places. Gottlieb said that he’ll still be wearing a mask to ease other people’s concerns about contracting the virus.

“I’ll probably continue to wear it a little bit longer than perhaps I need to based on the overall risk, just because I think it’s a matter of etiquette,” he noted. “I think when I go into a store or pharmacy and other people are there who feel uncomfortable, who feel vulnerable, if they see a lot of people around them wearing masks it makes them more comfortable.”

“I’ll do that in my community,” he added. “I think it’s a community standard and a community norm now. But I think a lot of people are going to take the option not to wear.”