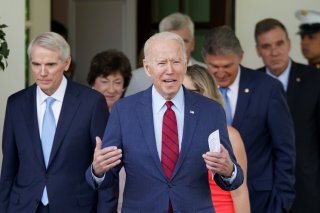 Axios reported Wednesday night that the White House has the framework of an agreement with a bipartisan group of Senators on a new infrastructure package. On Thursday, the White House formally announced that a deal had been reached.

“We’ve struck a deal. A group of senators – five Democrats and five Republicans – has come together and forged an infrastructure agreement that will create millions of American jobs,” the president's Twitter account said Thursday.

“They have my word. I’ll stick with what we’ve proposed and they’ve given me their word as well,” the president said at a White House event Thursday with the group of senators, per CNBC. “None of us got all that we wanted. I didn’t get all that I wanted. But this reminds me of the days we used to get an awful lot done up in the United States Congress.”

However, the package is not a done deal to pass into law.

Some Democratic senators, including Richard Blumenthal of Connecticut and Elizabeth Warren of Massachusetts, said Thursday that the version of the bill in the compromise was not adequate, with Blumenthal calling it “way too small. Paltry, pathetic.”

House Speaker Nancy Pelosi said early Thursday that her caucus will not move the bipartisan bill unless there's also passage in the Senate of a reconciliation bill containing additional priorities. The passage of two different bills, one of which went through reconciliation, was also how the Affordable Care Act passed in 2010, also with Pelosi as speaker.

"This is important," Pelosi said. "There ain't going to be a bipartisan bill without a reconciliation bill."

The Axios report had placed the price tag of the deal at $1.2 trillion over eight years, or $974 billion over five years, including $559 billion in new spending. There does not appear to have been any official agreement, and any such agreement would still have to pass Congress, although the parties are scheduled to meet at the White House today. “Some details still need to be ironed out,” the Axios report said.

“White House senior staff had two productive meetings today with the bipartisan group of senators who have been negotiating about infrastructure,” the White House said in a statement late Wednesday. “The group made progress toward an outline of a potential agreement, and the president has invited the group to come to the White House (Thursday) to discuss this in person.”

"Republicans and Democrats have come together along with the White House, we’ve agreed on the framework and we're going to be heading to the White tomorrow," Sen. Mitt Romney (R-UT) told CNN, per Axios, and presumably in reference to the White House. The meetings between the Senators and Biden were set to take place ahead of a planned Congressional recess over the July 4 holiday weekend.

“We won’t get enough votes to pass either unless we have enough votes to pass both,” Senator Majority Leader Charles Schumer of New York said on the Senate floor Thursday, CNBC said. “When the Senate returns in July, it will be time to take the next step and hold the first votes on the bipartisan infrastructure bill on the floor of the Senate. Senators should also be prepared to consider a budget resolution that will clear the way for the budget reconciliation bill as soon as possible.”

The deal, if it becomes law, would represent a rare bipartisan success in Washington, and also a legislative success for the Biden Administration, although the administration is unlikely to get everything it proposed in its initial infrastructure package, which it dubbed the American Jobs Plan. It’s unclear whether a planned bill would go by that name.

The Trump Administration, despite numerous instances of declaring certain weeks “Infrastructure Week” before inevitably getting distracted, never passed an infrastructure bill during its four years in office.

Bipartisan talks may have been necessary since the Democrats have small majorities in both houses of Congress, and not enough votes to overcome a filibuster in the Senate. But the bipartisan agreement would give the measure enough support from Republicans to overcome a filibuster. Bills passed under reconciliation rules can pass with a simple majority in the Senate, which the Democrats can do if every Democratic senator votes for the bill. That’s what happened with the American Rescue Plan Act in March when Vice President Kamala Harris broke a tie in the Senate.

Another notable aspect of the deal framework: There has been no report of additional stimulus checks being included in the infrastructure bill. This is not surprising, since the Biden Administration had not proposed such a thing in the original American Jobs Plan.

Earlier this spring, 21 senators wrote a letter to the president, asking that additional stimulus checks be included in the administration’s infrastructure plans. However, it’s unlikely that the political will exists for such a measure since the Biden Administration has not included such a request in any of its proposals, whether the federal budget or any of its major legislative proposals.