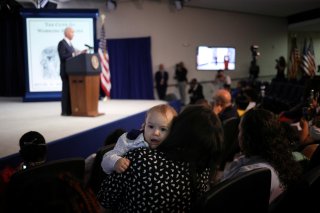 In recent months, there has been little movement on the enhanced tax child credit on the federal level, but there is one particular state that is taking the initiative to help out its inflation-weary parents.

As reported by Fatherly, Vermont appears to be moving ahead with a new tax package that could potentially give out sizable direct payments to thousands of parents.

“The House and Senate lawmakers hammered out a deal on its H.510 bill, approving a $40 million tax-cut package that, in part, will give families under a certain income threshold $1,000 per kid in the form of a child tax credit,” the publication explained.

“The two chambers worked quickly to agree on the tax credit provisions, and on Thursday, May 12th, it hit Governor Phil Scott’s desk, awaiting his signature,” it continued, adding that it is not yet clear if Scott will indeed put his signature on the bill.

Households making $125,000 or less would be eligible for the full credit, while families claiming the credit would lose $20 per $1,000 over the income threshold. Estimates suggest that about 33,000 children in the state would benefit from the credits.

Meanwhile, in an effort to ensure that more low-income families who don’t file taxes can receive their enhanced child tax credit, the Biden administration is once again directing them to an online portal where they can submit the necessary information to claim the payments.

First introduced last fall and available at ChildTaxCredit.gov or GetCTC.org, the portal was jointly rolled out by the U.S. Treasury Department, the White House, and the nonprofit tech organization Code for America. The tool, however, was inactivated for this year’s tax season to encourage taxpayers to file their full returns, which would allow them to claim other tax credits as well.

When President Joe Biden signed off on the $1.9 trillion American Rescue Plan in March 2021, the bill provided eligible parents as much as $3,600 for a child under the age of six and up to $3,000 for children between ages six and seventeen. This amounted to a $250 or a $300 payment for each child that was issued to parents each month from July to December last year. These eligible households are entitled to the second half of the tax credit money if they filed a federal tax return this year.

Largely due to opposition from Sen. Joe Manchin (D-WV), the enhanced credits were never extended for another year via the Build Back Better legislation. The lawmaker had long contended that doing so would only discourage people from working and that any additional federal spending would exacerbate current inflationary pressures.