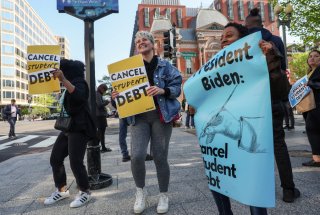 There’s no question that the highly anticipated decision from President Joe Biden to forgive student loan debt is getting closer by the day.

For months, Democratic senators such as Chuck Schumer (D-NY) and Elizabeth Warren (D-MA) have been leading the effort to cancel $50,000 of student loan debt per borrower.

The president, however, has remained more conservative, indicating that he likely won’t go over his campaign promise of $10,000 per borrower. The White House has also signaled that individuals making more than $125,000 a year would likely be ineligible for any forgiveness.

As reported by CNBC, Ryan Tucholski is one such individual eagerly awaiting Biden’s decision. “Nobody likes the limbo,” said the forty-one-year-old, who runs a professional trade association in central Florida.

Tucholski graduated from the University of Toledo in 2003, but he is still saddled with more than $24,000 in student loan debt.

“I’m not asking for a handout. Something is just not working with these loans,” he said. “If this were a mortgage, there would be hearings in Congress about it.”

Persis Yu, policy director for the Student Borrower Protection Center, told the business news outlet that “student debt is crushing borrowers at nearly all stages of their lives.”

According to a recent Bankrate.com poll, about 60 percent U.S. adults who have student loan debt have put off making important financial decisions, such as saving for retirement or emergencies, purchasing a home, or paying off other high-interest debt like credit cards. For Gen Z and millennial borrowers, that figure jumps to 70 percent.

Yu continued by contending that debt cancellation is necessary after “decades of mismanagement, abusive practices and general incompetence” in the student loan system.

Meanwhile, there appears to be plenty of pushback among Republicans. Sen. Mitt Romney (R-UT) and several of his colleagues have introduced the Student Loan Accountability Act, which would prohibit the Biden administration from broadly canceling student loan debt.

“It makes no sense for the Biden Administration to cancel nearly $2 trillion in student loan debt. This decision would not only be unfair to those who already repaid their loans or decided to pursue alternative education paths, but it would be wildly inflationary at a time of already historic inflation,” Romney said in a release.

“Democrats and Republicans alike have called on the President to not take this unwise step and pile more onto our $30 trillion national debt. And while the President’s legal authority in forgiving this debt is dubious at best, our bill would ensure that he would be prevented from taking action,” he concluded.