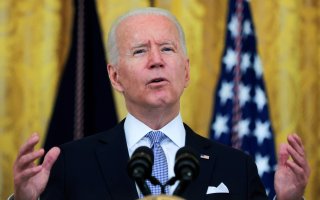 Following weeks of negotiations, the Biden administration has reached a “framework” of what will be in the version of the president’s “Build Back Better” plan that will likely go before Congress for a vote soon.

The deal is not final, but in an email to supporters, the Biden-Harris political operation described the Framework as “a plan for my agenda I believe can pass the House and Senate.”

There have been various reports in recent weeks about what was in or out of the bill, but President Joe Biden’s announcement says that the expanded Child Tax Credit will indeed remain. However, while the administration had originally hoped to extend it by five years, the framework only extends it for one.

A White House fact sheet laid out more about how the credit will work starting in 2022.

“The Build Back Better framework will provide monthly payments to the parents of nearly 90 percent of American children for 2022—$300 per month per child under six and $250 per month per child ages 6 to 17,” the White House said. “This historic tax cut will help cover the cost of food, housing, health care, and transportation and will continue the largest one-year reduction in child poverty in history. And critically, the framework includes permanent refundability for the Child Tax Credit, meaning that the neediest families will continue to receive the full Child Tax Credit over the long-run.”

Brought into being by the American Rescue Plan Act in March of 2021, the monthly payments from the Child Tax Credit began in July, and have continued every month through December, while most will get additional credits when they file their taxes next year.

The Center on Poverty and Social Policy at Columbia University has been issuing reports in recent months about how the Child Tax Credit has made a difference in reducing poverty, even after the first month.

“Using our innovative approach to tracking monthly poverty rates, we project that ongoing COVID relief efforts continue to have a sizable effect on reducing child poverty keeping 6 million children from poverty in July 2021 alone (a reduction of more than 40 percent). This impact also resulted in a notable drop in child poverty between June and July 2021, due primarily to the rollout of the expanded Child Tax Credit. On its own, this new payment kept 3 million children from poverty in its first month,” the Center said in late August.

Others, such as Bruce Meyer and co-authors, at the Becker Friedman Institute at the University of Chicago, have been argued that the Child Tax Credit discourages work.

The Build Back Better framework is only a framework and has not passed Congress yet.