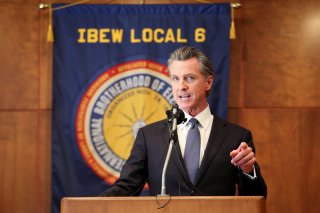 In an effort to blunt California’s soaring gas prices, Gov. Gavin Newsom has unveiled a proposal that would give every vehicle owner in the state a $400 tax refund in the form of a debit card.

Newsom announced the effort in a video on Twitter. The plan is part of an $11 billion package his office said would help residents deal with fast-rising prices at the pump. Gas in California averages $5.88 per gallon, according to AAA.

“That direct relief will address the issue that we all are struggling to address, and that’s the issue of gas prices,” Newsom said in the video. “Not only here in our state, but of course, all across this country.”

According to the governor’s office, the refunds would include $400 for each registered vehicle that a person owns, up to two. Those who own electric cars would also qualify, but most businesses with fleets of vehicles would not be eligible.

While Newsom waits for the proposal to be approved by the state legislature, Georgia Gov. Brian Kemp on Wednesday signed into law a state income tax refund that will see the state’s households get payments of between $250 and $500.

“I just signed HB 1302, returning over $1 billion in surplus funds to GA taxpayers,” Kemp tweeted. “As Bidenflation runs rampant across the country, in the Peach State, we are bringing this relief to hardworking Georgians—because that’s YOUR money, not the government’s.”

“Thanks to the hard work of Minnesotans across the state, Minnesota’s economy is strong,” Walz said in a statement, adding that 2.7 million state residents would be in line to receive the money. “With a historic surplus, we have an opportunity to provide direct relief to Minnesotans and invest in the future of our state. Amid global economic uncertainty, direct payments are one of the best ways to make it easier for Minnesotans to pay their bills. Right now, we have the resources to send $1,000 to Minnesota families.”