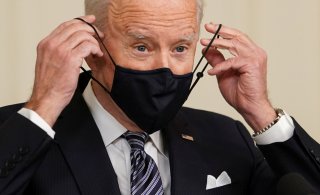 Amid the current pocketbook-hitting high-inflationary environment and the fast spread of the Omicron variant across the United States, there appears to be increasing demands for another round or two of stimulus checks.

The Labor Department recently confirmed that inflation in November surged 6.8 percent on a year-over-year basis, accelerating at its quickest pace since June of 1982. The consumer price index (CPI)—which gauges the overall cost of a wide-ranging basket of goods and services—climbed 0.8 percent only in the last month.

Not to be outdone, medical experts are now warning that the Omicron variant’s spread could accelerate in the coming weeks, which could potentially mean more business shutdowns and associated financial troubles for tens of millions of cash-strapped, pandemic-weary Americans.

Against this concerning backdrop, there are at least seven circulating petitions that are demanding more stimulus payments—despite the fact that Congress had previously approved a $1,200 check in April 2020, $600 in December, and the $1,400 payments green-lighted in March under President Joe Biden’s American Rescue Plan.

The most popular petition by far is being orchestrated by a Colorado restaurant owner whose business has been hard hit by the nearly two-year-long pandemic.

“I’m calling on Congress to support families with a $2,000 payment for adults and a $1,000 payment for kids immediately, and continuing regular checks for the duration of the crisis,” reads the Change.org petition, which is fewer than twenty thousand signatures away from hitting its highly ambitious three-million target.

“Our restaurant community is wrestling with seeing everything we all have worked so hard for irrevocably changed. … Our talented and cherished team, some of whom have been with us since we opened our doors fifteen years ago, are now without an income. Like our team, my family has lost all of the income from our restaurant, and business owners, and the self-employed can’t claim unemployment. This is the story of America right now,” the petition continues.

Furthermore, the Senior Citizens League, which has received dozens of letters from retirees who just can’t make ends meet, is calling for direct payments only for Social Security recipients.