Capitol Chaos: Why Congress Must Rally Around the Build Back Better Bill 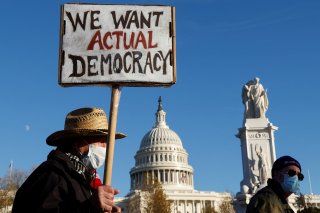 But what will happen in January? It appears that the money will come to a stop unless Congress can come together and quickly pass the Democrats’ Build Back Better bill.

President Joe Biden’s massive $1.9 trillion American Rescue Plan, which was passed last March, green-lighted the federal government to give eligible parents as much as $3,600 per year for a child under the age of six and up to $3,000 for children between ages six and seventeen. This all means that a $250 or a $300 payment for each child has been direct deposited each month in parents’ bank accounts.

All Eyes on Build Back Better

But those popular funds will come to a screeching halt if the legislation doesn’t pass, which includes a one-year extension of the direct cash payments. If the measure fails, then the maximum child tax credit would fall by $1,000 per school-aged child and $1,600 per child under six. In addition, millions of the country’s lowest-income families would become ineligible for the credits once again.

“No family in America should struggle to get by,” said Gaylynn Burroughs, senior policy counsel at The Leadership Conference on Civil and Human Rights, per CBS News.

“Without the CTC, these families—many of whom are families of color—will be forced back into a position of instability,” she added.

It appears that recent data supports her claim. One eye-opening analysis released by the Center on Budget and Policy Priorities has revealed that nearly ten million children could potentially fall back into poverty without an extension of the enhanced credits.

“The enhanced tax credit has enabled parents across the country to pay for food, clothing, housing, and other basic necessities and is expected to lower the number of children experiencing poverty by more than 40 percent as compared to child poverty levels in the absence of the expansion,” the Center on Budget and Policy Priorities said in its report.

“But Congress must pass the Build Back Better bill to maintain this progress,” the report continued. “If Congress fails to act, monthly child tax credit payments will not be made on January 15, and many families will struggle to make ends meet. Moreover, failing to pass Build Back Better would take away the entire credit from many children who would no longer qualify at all and would cut the amount of the credit for millions more.”

A separate report put together by the Annie E. Casey Foundation showed that a permanent expansion of the credits could potentially lift more than four million children out of poverty.