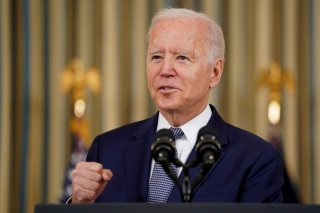 Since the child tax credit payments began rolling out in mid-July, the number of adults living in households with children that reported not having enough to eat has plummeted by 3.3 million—a total reduction of about one-third, according to data compiled from the latest Census Bureau’s Household Pulse Survey.

“A key reason these payments likely reduce hardships like food insecurity is that the American Rescue Plan’s expansion of the Child Tax Credit made children in the lowest-income families eligible for the full credit for the first time. Previously, some twenty-seven million children received only a partial Child Tax Credit or no credit at all because their family’s incomes were too low,” wrote Claire Zippel, senior research analyst at the Center for Budget and Policy Priorities and author of a recent report on the topic.

“Congress should make it a top priority to extend the monthly payments and ensure that the full credit remains permanently available to children in families with the lowest incomes,” she continued.

Due to the president’s ambitious stimulus bill passed last spring, eligible parents are now able to receive as much as $3,600 per year for a child under the age of six and up to $3,000 for children between ages six and seventeen. Broken down, this means that a $250 or a $300 payment for each child will be direct deposited each month through the end of the year.

Zippel added that these timely credits have been especially beneficial to Black and Latino households, who’ve often suffered the most due to the ongoing pandemic.

“The improvement has been dramatic for all racial and ethnic groups but particularly for Black and Latino people,” she noted.

“The number of Black, Latino, and white adults with children in households where someone didn’t get enough food has each fallen between one-fourth and one-third since early July. These declines are especially important among Black and Latino people, whose food hardship rates were—and remain—about double the white rate,” she continued.

The survey also revealed that the most common way parents with household incomes below $25,000 used the credit payments was for food, followed by utilities, clothing, rent or mortgage, and education-related costs.

“Households with incomes above $25,000 also spent a sizable portion of the credit on these kinds of necessities but less than lower-income families, which face more difficulties affording the basics,” Zippel said.

“Compared with those with less income, the households with incomes above $25,000 were, for example, more likely to pay down debt or save the funds for later use,” she added.