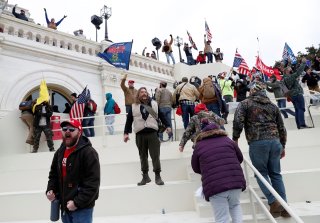 The insurrection at the U.S. Capitol on January 6, 2021, has led to criminal charges for more than seven hundred and fifty people.

The charges have been for a wide variety of crimes, ranging from assault to trespassing to disorderly content and many more. Of those charged, nearly two hundred have entered guilty pleas so far.

Many noticed, for much of 2021, that no one had yet been charged with sedition or seditious conspiracy. However, that changed January 13, when the Department of Justice announced charges against eleven people, including Stewart Rhodes, the leader of the Oath Keepers militia. The charges, handed down by a federal grand jury in the District of Columbia, included counts of seditious conspiracy. Nine of the eleven people had been charged with January 6 crimes previously.

“The seditious conspiracy indictment alleges that, following the Nov. 3, 2020, presidential election, Rhodes conspired with his co-defendants and others to oppose by force the execution of the laws governing the transfer of presidential power by Jan. 20, 2021,” the DOJ announcement said. “Beginning in late December 2020, via encrypted and private communications applications, Rhodes and various co-conspirators coordinated and planned to travel to Washington, D.C., on or around Jan. 6, 2021, the date of the certification of the electoral college vote, the indictment alleges.”

There’s something else notable about the charges: Those accused of sedition, if convicted on those charges, could lose their Social Security benefits.

Under a heading called “Conviction Of Subversive Activities,” it states that if an individual is convicted of one of several offenses, including espionage and censorship, sabotage, or “treason, sedition, and subversive activities,” a judge may order blocking of such benefits. That language appears to be connected to the days, mostly in the 1950s, when those accused of being Communists were sometimes denied benefits. The issue was litigated in a Supreme Court case called Flemming v. Nestor.

It should be noted that revokal of Social Security benefits will be at the discretion of judges, and would only come into play in the event of a conviction. None of the defendants accused of seditious conspiracy have been convicted of the charge yet.

For most people convicted of crimes, their Social Security benefits are suspended while they are incarcerated but reinstated once they complete their sentence. But there are separate rules for those accused of sedition and crimes like it.