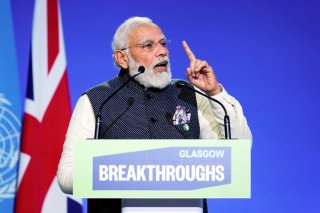 Several of the world’s biggest polluting nations have outlined their commitments to tackle climate change at the ongoing COP26 summit.

One of the more notable eyebrow-raising actions came from India’s Prime Minister Narendra Modi, who pledged to reach net-zero carbon emissions by the year 2070—which was a full two decades beyond the target set by COP26 organizers.

Meanwhile, China’s President Xi Jinping, in a written statement, pressed countries to take “stronger actions” in battling climate change. “I hope all parties will take stronger actions to jointly tackle the climate challenge and protect the planet, the shared home for us all,” he said, per China’s state media agency Xinhua.

However, COP26 organizers noted that Xi’s statement failed to make any new commitments on climate change—as the country’s target for net-zero carbon emissions remains far off in the year 2050.

Over the past weekend, President Joe Biden took time during a media briefing to blast Russia and China, saying that the two nations “basically didn’t show up in terms of any commitments to deal with climate change.”

Both Xi and Russian president Vladimir Putin have decided to skip the UN climate summit.

“I think it’s been a big mistake for China” not to show up at the climate change conference, Biden added. “They’ve lost their ability to influence people around the world, and people here at COP. It just is a gigantic issue and they walked away. How do you do that and claim to have any leadership mantle?”

Commitments to eventually end deforestation, however, were ramped up with more than a hundred world leaders coming on board. The countries participating in the ambitious plan, which include Brazil and China, pledged to work collectively “to halt and reverse forest loss and land degradation by 2030.”

“We urge all leaders to join forces in a sustainable land use transition,” the delegates agreeing to the deal noted in a statement.

“This is essential to meeting the Paris Agreement goals, including reducing vulnerability to the impacts of climate change and holding the increase in the global average temperature to well below 2 degrees Celsius and pursuing efforts to limit it to 1.5 degrees Celsius. Together we can succeed in fighting climate change, delivering resilient and inclusive growth, and halting and reversing forest loss and land degradation,” they continued.