Democrats Have a Stimulus Check Problem 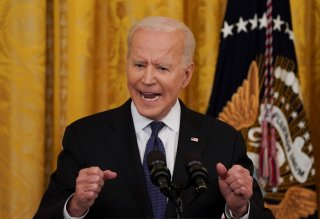 A large percentage of rural voters in battleground states don’t associate stimulus payments with the Democratic Party, according to a new poll, even though Democrats passed the third round of direct relief without a single Republican vote.

The poll, which was conducted by YouGov for Rural Objective PAC—a super PAC that seeks to boost support for Democrats in rural areas—found that only fifty percent of voters associate “providing stimulus checks directly to families and workers” with the Democratic Party, while thirty-two percent associated the payments with the GOP and another eleven percent don’t associate them with either party.

“We’re not connecting with these voters, even if we have great policy,” J.D. Scholten, the executive director of the Rural Objective PAC, told The Washington Post.

Although a large number of voters don’t associate the payments with Democrats, sixty-eight percent of them still supported the measure. It’s unclear, however, whether the party is getting credit for the major provision in President Joe Biden’s American Rescue Plan.

Several voters could be associating Republicans with the direct payments since the first two rounds of stimulus payments were approved in a bipartisan effort under the former administration. Both parties agreed that eligible Americans should receive $1,200 at the onset of the coronavirus pandemic, a provision that was featured in the Cares Act passed in March, and $600 in the December relief package.

But the poll also discovered that the majority of rural voters associated extended unemployment insurance and state and local government aid with the Democratic Party.

More recently, more than a dozen GOP-led states have ended some form of emergency federal unemployment benefits, including the bonuses set aside for the gig economy and self-employed workers, citing labor shortages and working toward a swift economic recovery as reasons to do so. Republican governors argue that the expanded insurance has prevented Americans from returning back to work.

Poll participants also largely associated the Democratic Party with requiring the use of masks in public until most people have been vaccinated and raising the minimum wage to $15 per hour.

The poll surveyed 2,149 voters in nine states—Arizona, Georgia, Iowa, Kansas, North Carolina, Ohio, Pennsylvania, South Carolina, and Wisconsin—from April 29 to May 13, 2021. The margin of error was plus or minus 2.5 percent.