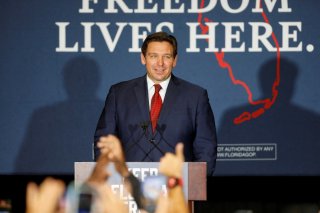 Florida Gov. Ron DeSantis has confirmed that he plans to spend “every penny” of the $12 million that his state has budgeted to relocate migrants.

“These are just the beginning efforts,” DeSantis said on Friday, per CNN.

“We’ve got an infrastructure in place now. There’s going to be a lot more that’s happening,” he continued.

Earlier last week, DeSantis, a potential presidential candidate in 2024, said he used taxpayer dollars to organize flights from Texas for fifty Venezuelan migrants to Martha’s Vineyard in Massachusetts. However, some of those on the flights noted that they were not told where they were headed.

DeSantis disputed that claim, saying that the families had signed a waiver before boarding. “It’s obvious that’s where they were going,” he said. “It’s all voluntary.”

As reported by The Hill, Vice President Kamala Harris accused DeSantis and Texas Gov. Greg Abbott, who has also recently transported migrants to Democratic-led cities, of “dereliction of duty” over their controversial actions. On Thursday, two buses of migrants from Texas arrived at Harris’ residence in Washington D.C.

“I think it is the height of irresponsibility … frankly, a dereliction of duty, when you are an elected leader, to play those kinds of games with human life and human beings,” Harris said, per Vice News.

“If you think there is a problem, be part of the solution,” she added.

Both Abbott and DeSantis have voiced displeasure regarding Biden’s immigration policies for the current issues at the border. Harris, however, took direct aim at the Trump administration.

“Under the previous administration, they decimated a system that was designed to address immigration,” she continued. “And so we have been spending, in the last eighteen months, an incredible amount of time and work and resources to reconstruct that system.”

Meanwhile, Axios reported that the lawyers representing about thirty migrants flown to Martha’s Vineyard pressed the Massachusetts attorney general and the federal government to launch criminal investigations into what they described as a “political stunt.”

The lawyers said their clients “were induced to board airplanes and cross state lines under false pretenses,” which included promises of job opportunities, schooling for their children, and immigration assistance.

“Once the planes landed, those who had induced our clients to travel under these false pretenses disappeared, leaving our clients to learn that the offers of assistance had all been a ruse to exploit them for political purposes,” Lawyers for Civil Rights said in letters to Massachusetts attorney general Maura Healey and Rachael Rollins, U.S. attorney for the District of Massachusetts.